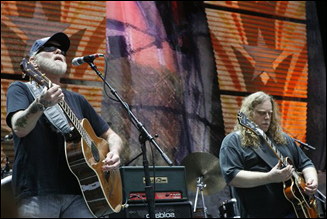 NEW YORK (CelebrityAccess MediaWire) – Coming off of their annual March residency at New York City's Beacon Theatre, the Allman Brothers Band have announced the next two legs of their 40th Anniversary celebratory U.S. tour. Following their May dates along the West Coast with the Doobie Brothers (at select shows), the rock and roll icons will share the stage with fellow Georgia road warriors Widespread Panic for their summer and fall run of shows beginning August 21 in Camden, NJ.

The two bands will spend the end of summer touring the east coast with stops in Canandaigua, NY and Gilford, NH before performing at the Nikon at Jones Beach Theater in Wantagh, NY August 27. A stop in Mansfield, MA and Hartford, CT will follow before back-to-back shows at the Charter One Pavilion in Chicago close out this leg of the trek. With only a month to rest, the ABB and Panic do it again with two shows at the Verizon Wireless Amphitheatre in Charlotte, NC to kick off a southern run taking them through Virginia, Raleigh, NC, Knoxville and Nashville, TN before two final shows in the Lone Star State October 16 at the Superpages.com Center in Dallas and October 17 at the Cynthia Woods Mitchell Pavilion in Houston.

The nationwide trek comes after the Allman Brothers Band–Gregg Allman (vocals and keyboards), Butch Trucks (drums and tympani), Jaimoe (drums), Warren Haynes (vocals, lead and slide guitar), Derek Trucks (slide and lead guitar), Oteil Burbridge (bass) and Marc Quinones (congas and percussion)-wrapped up an annual residency at the Beacon Theatre where the Brothers performed 101 songs in 15 nights with the help of a who's who of musician friends sitting in various nights including Eric Clapton, Bob Weir and Phil Lesh of the Dead, Trey Anastasio and Page McConnell of Phish, John Bell and Jimmy Herring of Widespread Panic, Sheryl Crow, Billy Gibbons, Kid Rock, Bruce Hornsby, and Levon Helm, among many others. To honor their 40th birthday on March 26, the night was a special "Evening With" show (no guests) where the band performed their 1969 self-titled debut in its entirety as the opening set. For a full list of songs, see below. All
15 of the Beacon shows were broadcasted on the cutting-edge webcast site www.moogis.com, the brainchild of Butch Trucks.

Athens, GA's Widespread Panic, celebrating over 23 years together, will be joining the Brothers for the summer and fall trek. After years of relentless touring, Panic continues to be one of the biggest selling bands on the road today. They have sold out venues across the country, ranging from New York's Madison Square Garden to their record strength of sold out nights at Colorado's Red Rocks Amphitheatre. Although both bands have shared the stage at a number of festivals, this will be their first extensive joint tour outing.