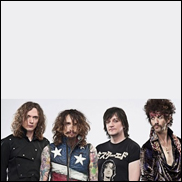 LONDON (VIP NEWS) — The Darkness have announced a UK and Ireland tour to celebrate the 10th anniversary of their debut album, Permission to Land.


They will visit some "less frequently visited" parts of the UK", in what they have dubbed their Outreach Programme.


After supporting Lady Gaga on her 2012 arena tour, they say they are keen to return to the "sweat and heat of the club show environment".


The tour will include the towns Buckley in Flintshire and Dorking in Surrey.


As part of the anniversary they will perform hits from their debut, including Get Your Hands Off My Woman and I Believe In a Thing Called Love.


The set list will also include tracks from their later top 10 albums, Hot Cakes and One Way Ticket to Hell… And Back.


The Suffolk rockers reformed in 2011 after a five-year break.


The Darkness will play cities such as London and Dublin.


However, they say they have chosen venues "that can be safely described as intimate compared to March's tour of large city halls".


Earlier this year they went on their Let Them Eat Cake world tour, which took in countries including the US, Germany and Australia.


The band say they are in the process of recording new material.