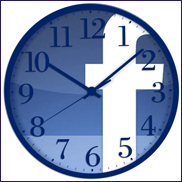 Oldsters are about yesterday.


Youngsters are about today.


Documenting your entire life history, building a timeline, a shrine to
yourself, so that the people you grew up with will be impressed? That's for
baby boomers. Their children want nothing to do with it. Kids are for
living, oldsters are for dying.


Want to communicate with your millennial in college? Then you'd better learn
how to text, the younger generation barely e-mails. Talking on the phone?
Who'd want to waste so much time!


The oldsters are rarely early adopters. They know the value of money,

they're set in their ways. For all the old bloviators bemoaning the loss of
privacy online, it's the kids who got the memo, that if they post pictures
of illicit activity they might not get a job in the future. Kids believe in
evanescence, oldsters believe in the permanent record. Ergo, the growth of
Snapchat.


Kind of like the Facebook phone. The business media did not stop trumpeting
its arrival. But the truth is a kid has no problem employing Facebook on his
phone, assuming he wants to use it, it's only oldsters who have this
problem, oldsters who are not about to switch providers who are still
lamenting the loss of physical keyboards. Want to know how someone's
technologically toast? If they still use a BlackBerry. You're wiping out
utilization, because it's all about apps. E-mailing and texting back and
forth is for business people who miss the future, as they plot where to have
lunch.


There seems to be this belief that there's stasis in the digital realm. As
if Microsoft still ruled and tablets were not about to eclipse desktops.
Sure, the digital highway is littered with the carcasses of failed
enterprises, whether it be MySpace or Pets.com, but to think that iTunes is
forever is to have missed the memo. The main asset of iTunes? The credit
card numbers. Other than that?


As for Google… It's been proven no one can eclipse the company in search,
but is search, as we know it today, important tomorrow? Are we really gonna
just type keywords into a blank field?

The only company that seems to know what's going on is Amazon. Which refuses
to worry about profits and keeps plowing whatever money it makes into
innovation, old style Microsoft innovation, not pure, incredible Apple
innovation. Yup, the first iteration of Amazon products always sucks…but
they keep on improving them. And they keep adding features to Prime and
inventing new products.


And isn't it fascinating that the young 'uns were the last to come to
Twitter. The old techies and early adopters were there first. But their
parents still don't understand the need for Twitter, never mind how to use
it.


We live in a fluid society. If your result comes up on the second page of
Google, it might as well not exist…hell, if it's not one of the first two
or three hits, if not the very first.


Bury that information on Facebook, soon no one will see it.


But those who care are exchanging real time info constantly in the new
world. That's where it's at.


And searching for profits, locked into an old paradigm, establishing contact
between the distant, the lost, Facebook is missing the future.


Look at it this way… Kids already knew their friends, were already in
constant contact with them. It's baby boomers who needed to catch up on the
lost souls.


But I am saying to look at the trends.


Microsoft owned desktop computing. They've even been reluctant to port their
productivity apps to the iPad.


Is this a recipe for further success?


And if you want to know what a kid's up to, going to their Facebook page
will tell you very little. Hell, they're leaving few digital crumbs for
their parents… They're devouring the cookies and leaving no trace!