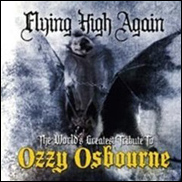 Conventional wisdom is musicians are fungible. If one dies or quits, you just get another. But players are not like cars, which you crash and then replace, they're not like workers on an assembly line, in the best cases they're unique, which is why we love them so, which is why their legends live on long past their deaths, which is why when bands pick up and go on without them, they're oftentimes missing a crucial element.

Ozzy Osbourne's album with Zakk Wylde, "No More Tears", is almost a masterpiece. The last worthwhile thing the Ozzman has done, it's listenable from start to finish. But after that, nada.

Ozzy was seen as washed-up. A fat joke.

And then he hooked up with Randy Rhoads.

Ozzy's vocal is enticing. But it's Randy's buzzsaw guitar that shreds your brain, makes you jump like a snake chopped into bits, across the room, to drop the needle on the track once again.

They say today's acts are just as good as the classics. I won't say it's an impossibility. But just because you top the charts, you're not as great, as talented, as endearing as those who came before. That would be like equating "The Da Vinci Code" with "Anna Karenina".

But it's not only Mr. Rhoads. A man I never knew and have no personal affinity for. It's also Keith Moon.


Like "Flying High Again", I heard "The Real Me" on shuffle on my iPod.


Let me start with John Entwistle. The Ox who never moved on stage. He stood stock still. But his fingers positively danced over his bass strings. Up and down. He was channeling sounds we were unaware of, transmitting them to the audience. He was such a virtuoso, hit the notes so effortlessly, that he never got the credit he was due.

Sure, Daltrey could sing. And Pete not only wrote those songs, he came up with the riffs. But the underpinning was Entwistle. And Moon.


Did you ever see him?


At this point, Ginger Baker was seen as the best drummer in rock. After all, he played with Eric! But the Who was always one step behind. They peaked after not only Cream, but the Beatles and Hendrix too. With "Tommy". Which they performed in its entirety twice, at the Fillmore East, in the spring and fall of 1969.


To watch Keith Moon was better than any Disney ride. He didn't seem human. He locked on to some vibration. And then he hit the drums in sequence, crossing his arms, positively scrambling like a spaghetti-limbed automaton. More powerful than anybody, louder than anybody, and more inventive, more CREATIVE than anybody.


The band's apotheosis is "Who's Next". A better album cannot be named. But if you want to hear great playing, check out "Quadrophenia". Where the instruments exist in their own spheres, air between them, yet come together to render a delicious whole.


The Who, like Ozzy, is still on the road. Give credit to the musicians for carrying on. But both acts are missing something. The players that made them great, that cemented their reputations.


And that's sad. But although we can no longer see these legends live, we can listen to the records. And that's why they still sell, are still stolen, are so desirable today. Because listeners can hear that undefinable genius.


Anybody can learn scales, technique, but that doesn't mean they add to the canon, that they transcend what became before, that their work burns itself into our brains and never leaves.


This music used to be the most important cultural element. TV was a joke. Movies a collaborative effort that simulated reality. But when these players, these great bands, took the stage, it was life itself!

That's what sold the records. That's what sold the tickets. You couldn't even get in the building. Desire was just that great. To see these twentysomethings testing limits, having honed their skills in basements and clubs when few were paying attention, only to get so good that they transcended everybody else. Sure, they wanted money, chicks, but the music was an end unto itself. There was no big media machine. Only the high of playing with your bros on stage, for an adoring audience, which could never get enough.