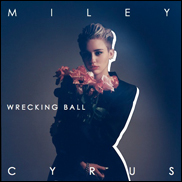 It's a good record.


Miley was taking no chances, at least not her manager, Larry Rudolph. What you've got is a faded teen star, the heartthrob of those without pubes, heading straight to the 7-11. How to make her relevant today? Have her grow up?


This is something that Scooter Braun has been unable to do with Justin Bieber. Still hamstrung by his pre-teen image, Justin's on bad behavior, testing limits all over the world in a way no one approves of, indicating that contrary to growing up, he's experiencing the adolescence he's been denied. It's got nothing to do with music. Justin's like a chicken with its head cut off, and Miley is a professional, getting busy, down to work, focusing first and foremost on her career.

If you don't respect Miley Cyrus, you've got no clue how the music game works. I mean it's fine if you want to wear your jeans, play rock music and try to rise up via the grass roots, but Miley was born famous and in today's world there's no room for middle level pop stars, only fantastic winners, and she's executing the program perfectly, it's as if she went to an alternative AA and is working all the steps.


That's right, steps you've seen before. But for an audience that missed out the first time. Who were still in diapers, or not even born when Madonna kissed the vacant Britney. And unlike Britney Spears, Miley Cyrus evidences a personality. And that's the key to longevity. Miley's all over YouTube, twerking, she's growing up with her fans, her admirers, and they love her for it!


This music is not made for baby boomers, whether they be aghast parents or the calcified media. Miley is playing them like a Stradivarius, even though she's got no musical skill. Her skill is marketing. And that's a perfect fit for today's world.

Oh, the single isn't groundbreaking. But how much successful music is today anyway? Miley's not in it for the art, but for the fame, for the riches. Which, unfortunately, is the ethos of most of today's younger generation. They've got access via the Internet and their futures are challenged, they're selling their wares constantly. Yup, the first thing a young "artist" will ask you is…HOW DO I MAKE MONEY?


So now we're going to criticize Miley Cyrus for ringing the bell, for doing this better than anybody?


And speaking of the video, can we give her credit for the 119 million views she's accumulated at this point? Do you know how hard it is to reach that number? You can't sit at home and do that with your webcam. Hell, in a world where "X Factor" has abysmal ratings, half of what the show had in its debut, where its follow-up, "Master Chef," pulls better numbers, are we really going to criticize someone who takes her career into her own hands and succeeds?


Yup, while you've been bitching, the TV singing contest died. As if it was still making stars. That's conventional wisdom, always two steps behind.


I'm not saying that if you want to get ahead you should imitate Miley Cyrus, she's already done it, it'd be like trying to imitate Madonna thirty years ago. Cyrus saw the opportunity and went for it. And speaking of going for it, wasn't Madonna's number one skill marketing? Does anybody consider Madonna a musician, does anybody laud her voice? Of course not!


Unfortunately, Miley Cyrus is bringing nothing new to the party. But ain't that music, where everybody plays it safe.


Still, the verse of "Wrecking Ball" is endearing, hooky as hell. The chorus is not up to snuff, merely adequate, but how many records ring your bell? It's fodder, for the machine. And you can hate the machine, but never deny it exists.


Hell, you know you're doing it right when Elton John is criticizing you. I love Elton, but he doesn't get it. Miley Cyrus is incredibly smart, she's manipulating the clueless, even him, to increase her fame, to drive her record to number one, and she's executed beautifully.