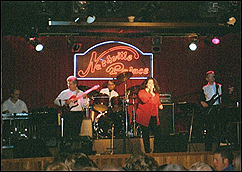 (CelebrityAccess MediaWire) — The Nashville Palace, which closed its doors earlier this year, will reopen on New Year’s Eve as The New Nashville Palace with a show featuring Phil Vassar, John Stone and LoCash Cowboys.

Steve Smith and John Taylor, owners of Tootsie’s Orchid Lounge, purchased and renovated the 600-capacity venue near Nashville’s Opryland. The New Year’s Grand Opening bash will include a free shuttle between the Palace and Tootsie’s all night.

“As most folks know, both venues have a history in the tradition of Country Music to harvest some of country music’s most renowned hit makers like Willie Nelson, Kris Kristofferson, Roger Miller, Alan Jackson and Randy Travis,” Smith said in a statement. “It is our intent to continue the traditions established by the precedent of these two world famous honky tonks and we’re extending the invitation to folks to celebrate the grand opening of the New Nashville Palace (and the arrival of 2006) at both clubs.”

Smith continued, “It is our hope to make the Palace ‘the place to be’ once again where country music fans can enjoy intimate performances by their favorite country stars in a show atmosphere. Just like Tootsie’s, we’re hoping the New Nashville Palace will become the back door to today’s Opry, right across the street.”