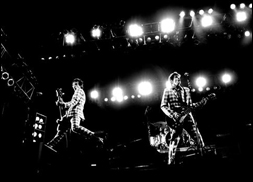 PORTO, Portugal (CelebrityAccess) — According to frontman Paul Westerberg, The Replacements June 5th show at Primavera Porto will be the last time the band plays together.

During the show, Westerberg told the crowd that the band was hanging it up and noted that the other members of the group were "lazy bastards" for choosing to stay at the hotel instead of posting for the sound check for the show. Since then, the group has canceled a series of planned concerts and currently lists no upcoming shows.

Westerberg and original bassist Tommy Stinson, together with drummer Josh Freese and guitarist Dave Minehan picked up the Replacements thread in 2013 after the original group went in hiatus in 1991 and were reported by Billboard to be working on new material, producing seven or eight songs over two recording sessions. However, Westerberg never seemed quite sold on the group, telling The Guardian that Stinson was enjoying the reunion more than Westerberg was.

“He went away and played in another group for so many years and wasn’t playing these songs, while these are my tunes and I’ve been playing a good handful of them forever,” Westerberg told The Guardian. “So it’s not quite as new for me to play I Will Dare or whatever.”

Westerberg also displayed his displeasure with the revived group in other ways, wearing a white t-shirt with a single letter spray painted onto the front and back at concerts over the past two months. When taken collectively, the letters from the different shirts make a message which reads: “I have always loved you. Now I must whore my past.” – Staff Writers