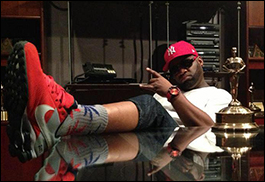 MEMPHIS, TN (CelebrityAccess) — The Three 6 Mafia announced that Robert 'Koopsta Knicca' Phillips, one of ithe early members of the Memphis-based rap collective has died after suffering an aneurysm. He was 40 years old at the time of his death.

According to TMZ, Roberts had been on life support in intensive care after suffering the aneurysm last week and finally succumbed to his malady on Friday.

"To all who are concerned Robert Cooper Phillips aka Koopsta Knicca has officially left us all," a post on Phillips' Facebook page said. "This is a great lost to us all. We will continue to keep him alive with his music."

Roberts joined Three 6 Mafia in the early 1990s, shortly before the release of their debut album Mystic Stylez. He would go on to appeared on a number of their albums, including Live By Yo Rep and When the Smoke Clears: Sixty 6, Sixty 1. He left the group in 2000 due to legal trouble, but went on to a solo career as well as collaborating with Three-6 member Lord Infamous in a side project, Da Mafia 6ix.

His most recent work was 2012's "Decepticon: The Return Of The Gods."

Roberts is the second Three-6 member to die in recent years, with Rick "Lord Infamous" Dunigan dying from a heart attack in his sleep on December 20th, 2013. – Staff Writers