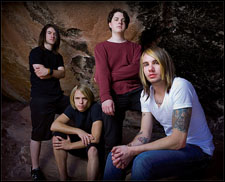 DENVER, CO (CelebrityAccess MediaWire) — The bassist and guitarist of Colorado band Tickle Me Pink was found dead on July 1st. Johnny Schou, 22, was found dead just hours before the band was set to mark the release of their debut album "Madeline" with an in-store appearance.

The band had just finished a series of dates with the Vans Warped Tour and were preparing to go on the road again with Scary Kids Scaring Kids and Finch.

A statement on the band's MySpace page said: "Further information regarding the band’s plans, and dates that have been previously announced, will be forthcoming in due time." – CelebrityAccess Staff Writers