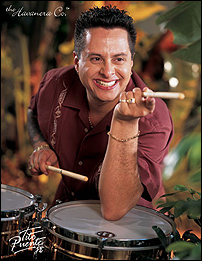 According to manager Frank Fiore, "The deal was a natural evolution of my twenty year relationship with Oscar Cohen and agents Paul LaMonica and Jody Wenig."

Associated Booking has for years represented the talents of B.B. King, Anita Baker, Roberta Flack and Bernie Mac. Says Cohen, "Like his dad before him, Tito, Jr. has the talent to capitalize on all media and entertainment platforms — we anticipate a bountiful relationship."

Wearing the moniker of "Latin Royalty" that accompanies the family name, the younger Puente takes his mission to heart saying, "Carrying the torch and the tradition of my father's music to a whole new generation of fans has been a lifelong dream of mine."

Puente, Jr's. new disc, planned for a spring 2004 release, is appropriately titled, "En Los Zapatos De Mi Padre," (In My Father's Shoes). The album will include performances by special guest stars on tracks of classics made famous from the 1950's through the 1970's.

Puente Jr. honed his craft playing the New York City club scene with other well-known Latin artists including the "Queen of Salsa," Celia Cruz. With the global resonance of today's Latin music, "In My Father's Shoes" is primed to bring back the music of the late Tito Puente in all its glory.

As heir to the throne of Latin music, Puente, Jr. continues to adhere to the soulful rhythms trademarked by his father adding a modern, edgy, and sensuous dance beat to his sound. Previous to the new album, he has had two Spanish-language albums, several Billboard dance hits and a Latin Music Award for Best Salsa Video of the Year for his cover of his father's seminal standard, "Oye Como Va."

In 2003, Puente, Jr. was named the Ambassador of Latin Culture and spokesperson for the Havanera Co. ™ (a Perry Ellis International brand). In addition to his musical endeavors, Puente Jr. will resume as spokesperson for the newly launched brand through December 2004. The Havanera brand is a Latin inspired clothing line that translates the joy of Latino culture into fashionable apparel. –by CelebrityAccess Staff Writers