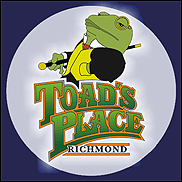 The 1,500-capacity Toad’s Place Richmond, in the revamped Lady Byrd Hat building in Richmond, Virginia, is set to open on June 7th with a public fundraiser for Greater Richmond SCAN (Stop Child Abuse Now), then a concert on June 21st with retro-swing group Squirrel Nut Zippers, according to the Richmond Times-Dispatch.

“The confluence of everything coming together took longer than we thought,” Jeff Sadler, the new club’s general manager, told the paper. “I’m a concert promoter, and I’ve been a bar manager, but I’ve never done business developments or construction before. I took what people said and believed them. I guess you could say I was a novice at construction issues.”

The club shares its name with the legendary Toad’s Place in New Haven, CT.

Other concerts scheduled for the new venue include the Summer of Love Tour with Jefferson Starship, Big Brother & The Holding Company, Quicksilver Messenger Service and Tom Constanten on July 5; Ricky Skaggs and Kentucky Thunder on July 13; The Michael Schenker Group on July 20; Reel Big Fish, Less Than Jake, Streetlight Manifesto and Against All Authority on July 21; and Ken Navarro on August 5.

Other acts waiting for confirmation include George Thorogood, rapper Mims, and George Clinton and Parliament/Funkadelic. –by CelebrityAccess Staff Writers