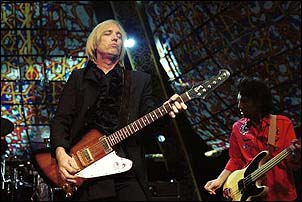 Tom Petty and the Heartbreakers will perform their entire new album,
"The Last DJ," Oct. 15 at Los Angeles' Grand Olympic Auditorium. The show will be videotaped and transmitted live by satellite to 38 U.S. movie theaters and will be simulcast live on radio stations in the US and Canada. The group will be backed by a full orchestra for the event. They will perform a second show at the venue on October 16, but it will not be broadcast. The new album is due October 8, and will be followed by a tour beginning October 30.