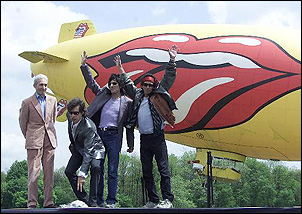 The Rolling Stones will kick off their world tour 2002/2003 at Boston's CMGI Field on September 5, marking the first concert in the new venue. The band announced 32 dates in the U.S. and Canada with more to come and will then tour Europe, Australia, Mexico and the Far East in 2003, hopefully including their first concerts in China. The tour's first leg concludes at the Pepsi Center in Denver on February 1.

The unique concept for the tour will showcase the band's diversity as musicians and performers with three dramatically different shows by playing stadiums, arenas and theatres/clubs all in one tour. Each show will combine the spectacular production and charismatic performances that fans have come to expect. The Rolling Stones, working closely with the design team responsible for the sensational sets and dramatic effects on previous tours (Steel Wheels, Voodoo, Lounge, Bridges to Babylon, No Security) will create three totally different productions (sets, lighting, special effects) offering fans completely unique experiences at each venue.

"Only The Rolling Stones would dare to come up with a concept so ambitious – three dramatically different shows in three different venues, said Michael Cohl, tour promoter. "It will be a spectacular musical event."

Some of the opening acts that will share the stage with the Rolling Stones are: No Doubt, Sheryl Crow, Buddy Guy, Jonny Lang with more acts to be announced later this week.

Rolling Stones World Tour 2002/2003 is presented by E* TRADE Financial. "The Rolling Stones are recognized as one of the greatest rock-n-roll bands of all time," said Mitch Caplan, President and COO E*TRADE Group, Inc. "We are thrilled to present this history making tour and excited about the experience and opportunities it will provide our customers."

Tickets will go on sale for shows in Boston and Chicago on Saturday, May 11, for San Francisco on Sunday, May 12, New York on Monday, May 13 and Denver on Saturday June 15. In keeping with the band's philosophy of making their shows accessible to all fans, tickets for the stadiums, arenas and theatres/clubs will be available in a broad range of price categories. There will be a limited number of Gold Circle seats while the remaining 95% of the house will average $85 for stadium shows, $100 for arenas and all tickets for theatre/club shows will be $50. Buys will be limited to 12 tickets per person for stadium shows, eight for arena shows and two for theatre/club shows.

Fans will have an unprecedented opportunity to follow the tour online through Virtual Ticket at www.rollingstones.com. Every ticket sold for the tour will include membership in the Rolling Stones fan club. Updated daily, users will be given an exclusive insider's look at every aspect of the tour. From rehearsals and preparations to on-going coverage via audio and videos streams, downloads, set lists and news and much more. RollingStones.com also heralds the launch of the official Rolling Stones Fan Club. In addition to following the tour, members will enjoy access to tickets, exclusive merchandise and other fans, in what is sure to be the premier destination and community place for Stones fans yet.
The Rolling Stones are completing negotiations to release a retrospective CD of their greatest hits from 1963 to the present with the addition of some new songs. The band will go into the recording studio later this month. The band will rehearse once again in Toronto.

says it will be "a little weird" to be without her guitar when she starts her European tour next week.

She will not be able to play her guitar onstage because of a horse riding accident last month that left her with a broken collarbone and rib.

"It's a little weird. … I guess I'll have to polish up my dance routine," the 27-year-old singer joked in a phone interview with The Associated Press on Monday.

Jewel said while she usually does a couple of songs without it, she's usually strumming her guitar throughout her performances.

Because of the accident, Jewel was forced to cancel her first two dates on the tour, which will now start May 13 in Germany instead of the planned Friday start in Italy.

The singer was thrown from a colt she was riding on the Texas ranch of her rodeo champion boyfriend, Ty Murray.

"He was really green, and he started bucking with me," Jewel said of the horse.

Despite the accident, Jewel isn't hesitant about getting on a horse again.

"I've ridden colts my whole life," she said. "When you work around livestock, you're going to get hurt."

On The Bricks Confirms Line-Up

June 28 They Might Be Giants, Superdrag, Lake Trout, Stereoblis

July 5 NO SHOW due to the holiday