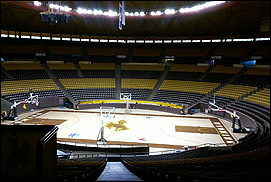 The arena, which was built in 1982, is scheduled to undergo $30 million worth of renovations, starting in March 2014. For years, it has been cleaned and maintained — but never improved.

That’s about to change.

“It’s been 30 years of basically just maintenance. We’ve taken care of the facility. We do a good job of managing it and keeping it clean. But we’ve invested next to nothing in the facility,” Wyoming athletics director Tom Burman said. “And so, it’s time that we invest in our programs.”

The renovations will be completed in two phases, the first of which is scheduled to begin in March 2014 and be completed by the beginning of the 2014-15 season. Phase I will cost roughly $12 million, the majority of which Burman says has already been raised. It will come with widespread changes to the court, the seating area surrounding it, the arena’s technology and behind-the-scenes facilities.

New seats will be installed in the lower bowl closer to the court, giving fans a better view and creating a more definitive home court advantage for the Cowboys and Cowgirls. The court will have new hardwood, and it will be rotated slightly to create more space for practices.

The technology in Arena-Auditorium will also be overhauled, with two video boards that Burman tells the Casper Star-Tribune (http://bit.ly/11CRqnK ) will be roughly two-and-a-half times larger than the one that is currently used. There will be new lights, a new sound system and new ribbon boards surrounding the playing surface.

The training room, locker rooms and media rooms will be gutted and provided new equipment as well.

Phase II, on the other hand, could be more of a long-term process, to be completed either one or two seasons after the first set of renovations, depending on funding.

The Phase II renovations will include: a glass entryway to the arena, new ticket booths and concessions areas, upgrades to the pavilion, a tunnel that will make it easier for people with disabilities to reach the court level, a UW Hall of Fame celebrating the university’s greatest players, and a historical center, which will take fans through the history of Wyoming’s various athletic programs.

All told, Phase II will cost another $18 million. And while the state legislature has agreed to donate up to $10 million by matching any single donation of more than $25,000, Burman says it will still take widespread support across Wyoming to reach this goal.

“It’s not a situation where we can do it with just a few. Cowgirls, Cowboys, ex-coaches, fans, alumni, the state, businesses that extract minerals from our state — there’s a whole bunch,” Burman said. “It just requires a lot of folks to jump on board, and we’re getting there.”

Burman stressed that while the renovations to Arena-Auditorium will create a better work environment for players and a more pleasurable experience for fans, it will also help ensure Wyoming basketball’s success in the future.

To win consistently, you need to recruit. And to recruit at a competitive level, you need to have facilities that make student-athletes want to choose the University of Wyoming.

“We built a state-of-the-art indoor practice facility four years ago, and the last few years, I’ve noticed that it has had an impact in soccer recruiting, in football recruiting. Kids, when they’re on their visit, they get a little wowed,” Burman said.

“An updated, energetic arena will create that ‘wow’ factor and help men’s and women’s basketball.”

Times have changed, Cowgirls basketball coach Joe Legerski said. It’s not enough anymore to simply sell a recruit on a coach, a community, a university or a program.

Now, you need the facilities to back it up.

“With recruiting anymore, it definitely is a facility-oriented competition. People are building practice facilities. People are renovating locker rooms and training areas,” Legerski said in a video on the Wyoming athletics website. “And when recruits come on visits now, that’s what they want to see. That’s what their parents want to see.”

Since the renovation project was announced in late May, a number of former Wyoming basketball players have donated to the cause — including former UW stars and NBA stalwarts Theo Ratliff and Reggie Slater.

These donations, Burman said, do not simply influence the basketball program and its fans. They will also bring a sense of pride to both the university and the state.

“The state of Wyoming has the Casper Events Center and the Arena-Auditorium, and that’s it. We’ve got to make this a showcase, a place that people from all over the state want to come to,” Burman said. “It’ll be something we can be proud of.”