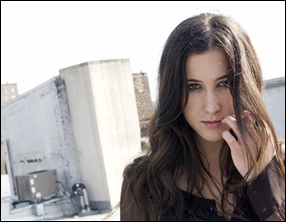 The clip for "Nolita Fairytale" begins with her entering a garage and removing the cover from a red piano. She sits down at the keyboard and — whoosh — the artist and piano soon float above a city street.

At this point, viewers may feel a little deja vu: So far, the new video is a step-by-step copy of the one for her breakout 2002 single "A Thousand Miles."

Only this time, things go screwy. Carlton cracks a sly smile before scampering away, abandoning the piano in the street. Seconds later, it gets creamed by a yellow taxi.

The destruction of the instrument is Carlton's attempt to make a fresh start — plowing through a five-year-old image that got bigger than the artist herself.

"That image kind of trumped everything else. It became almost iconic — the girl and the piano," says Carlton during an interview at an outdoor cafe near her apartment in the Nolita neighborhood of Manhattan. "They don't know who I am, they don't know the song, they don't know any of it. But they know the traveling piano video."

So Carlton and video director Mark Klasfeld, who created the floating piano, decided to purge it.

"To start anew, you have to kind of open the old book and then close it so you can then open the next book," says Carlton, who this day wears a floppy hat, black nail polish, skintight jeans, a knitted top and a nose stud.

Carlton, 27, is hoping a new book opens with "Heroes & Thieves," her third album after a turbulent few years that saw her break up with both her longtime boyfriend and her record label.

"I think the past couple of years have been one of those really hard-core evolutionary chapters for me," she says, sipping a double espresso. "This album reflects that."

The CD — co-written with Third Eye Blind founder Stephan Jenkins and songwriter Linda Perry — is an 11-song collection that mines the veins of longing, heartbreak and independence.

"Take away my record deal/Go on I don't need it," she sings on the first single. "Spent the last two years getting to what's real/And now I can see so clear."

For Carlton to lose her record deal seemed unfathomable in 2002 when her debut album, "Be Not Nobody," earned three Grammy nominations, including Record of the Year and Song of the Year.

Her second album, 2004's "Harmonium," which yielded the single "White Houses," also garnered good reviews but made little splash. MTV, VH1 and some radio stations balked at playing the single, which deals with a girl losing her virginity.

Carlton said she was frustrated by her then-label, Interscope Records, feeling like the second album wasn't supported as hard as she'd like.

"I felt I was being punished or smacked on the hand for kind of making a left turn," she says. "It's not like I had released an avant-garde album. I'd made certain choices that weren't typical or weren't expected of me."

She found comfort in an unexpected place: The Inc. Records — once known as Murder Inc. After being wooed by label head Irv "Gotti" Lorenzo, Carlton found herself among a stable of stars that includes Ja Rule, Ashanti and R&B singer Lloyd.

"It's an odd coupling. You would never think to put us together," Carlton admits. "He just blew me away with his level of passion and devotion in creating good music, no matter what genre it is. And his ear is excellent."

For his part, Lorenzo says he was smitten while listening to Carlton perform one of her new songs. "I was completely blown away, in all honesty," he says. "I was jumping around, cursing and everything. She was just looking at me, laughing. I thought she was thinking, 'This dude is completely crazy.'

"I think it was a breath of fresh air for her. I think the people who she worked with, even when they liked the record, they didn't jump and scream. I think she's one of the best talents that I've ever come across," he adds.

The new album also benefits from Carlton's association with Jenkins, who helped produce the disc and co-wrote five tracks. That made things slightly complicated when, during recording, they broke up their four-year romantic relationship.

"It's just such a special project for us. I'm proud of out musical partnership. I really think we just did our best work and so I look at it as my duty to bring this record to this stage in a way that continues the high standard that we reached in the studio," she says.

Though the topic of Jenkins still seems a tad raw, Carlton says she would happily work with her ex again. "He's a fantastic songwriter. I just think he's extraordinary. That mutual respect will forever live on," she says.

While her heart was breaking and her career was in tatters, Carlton relied on someone she'd toured with and befriended: Stevie Nicks, who appears on a song on the new CD.

"When I met her and was touring with her I was really in fragile state of mind and very unsure about what my next move was going to be," she says. "She became my home. She put her chiffon wing around me. She told me, 'You are up for this fight. You have no choice. You have to continue.'

"She thinks I'm this great songwriter. She said, 'You're one of those artists that need to get to their best-of record.' I just don't want to let her down," Carlton says. "And now I don't want to let myself down, either."

Armed with the new album, Carlton launches a two-year schedule of tours and promotions. Lorenzo insists she's under no pressure to produce sales immediately.

"I call her music 'forever music.' The record that she's writing is the record they'll be playing in the next 20 or 30 years," he says.