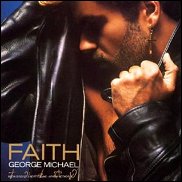 The album, which was written, produced and arranged entirely by George, spent 87 weeks on the Billboard 200 albums chart, including 12 weeks at #1 in 1988.

Faith also received a rare RIAA diamond certification, for U.S. sales in excess of 10 million units, and the Grammy Award as Album Of The Year.

This box set is a numbered, limited edition release by Legacy of Sony Music, that can be reordered now at the official website, and will be shipped January 31st.

The Faith: Deluxe Edition 12"x12" commemorative box set will include the remastered 10-song album on CD, another CD of remastered 7-inch and 12-inch singles and B-sides, and a 180-gram vinyl replica of the original LP.

There will also be a DVD (running 100 minutes) featuring a BBC interview from 1987 with UK journalist Jonathan Ross, and an electronic press kit produced in 1988 by Epic Records.

The DVD also includes all seven promotional videos, re-synched with the new remastered audio: "I Want Your Sex," "I Want Your Sex (uncensored)," "Faith," "Father Figure," "One More Try," "Monkey," and "Kissing A Fool."

Faith: Deluxe Edition is rounded out by a 60-page hard-bound book which includes an exclusive interview with George by BBC Radio personality Mark Goodier, and an essay by Robbie Elson of Genesis Publications in addition to some rare photos and memorabilia.

A separate memorabilia envelope will contain five art prints, a reproduction poster, tickets, and tour pass from the Faith tour.

Faith: Special Edition will feature the two CDs and the DVD.
A
standard remastered double-CD edition will also be released.  Both of these editions will be available at all retail outlets starting February 1, 2011.