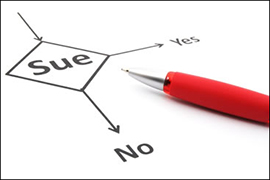 (Hypebot) – A recent lawsuit filed against YouTube-mp3.org, one of many easy-come easy-go sites which allow users to get audio download via YouTube video, suggests that major labels and the RIAA are perhaps unaware that SOPA did not in fact become law in 2012, and are behaving accordingly.

Earlier this week, basically all of the major record labels filed a lawsuit against YouTube-mp3.org, which as you may have guessed from the URL, helps people get audio downloads from YouTube videos. There have been a number of similar sites over the years, and they tend to disappear relatively quickly. Apparently this one lasted long enough that the major labels decided to sue.

There are many, many, many problems with the lawsuit which we'll be discussing, but let's start with the big one. The RIAA and the labels seem to believe that SOPA became law back in 2012, rather than being soundly rejected. That's because, as the EFF notes in a blog post, the real target of the lawsuit does not appear to be Youtube-mp3.org, but a bunch of third party service providers. Specifically, the lawsuit asks for two highly questionable remedies targeting non-parties to the lawsuit:

enjoining Defendants and all third parties with notice of the Order, including any Web hosts, domain-name registrars, domain name registries, and proxy or reverse proxy services, and their administrators, from facilitating access to any or all domain names, URLs and websites (including, without limitation, www.youtube-mp3.org) through which Defendants infringe Plaintiffs’ copyrights;

Again, this was the kind of remedy SOPA was designed to enable. But SOPA did not become law. As the EFF points out:

As we’ve explained before in other cases, this request is a gross overreach. Federal court rules have a narrow provision that lets successful plaintiffs request a court order against a defendant and people in “active concert and participation” with them, meaning a close associate or co-conspirator. That provision doesn’t allow for orders that bind every vendor providing services to a defendant, especially those with no direct business relationship. So the litany of intermediaries listed in the labels’ complaint are not within the court’s power to bind.

What the complaint asks for is also far broader than the law allows. By asking all of those intermediaries to block all “websites through which Defendants infringe Plaintiffs’ copyrights,” without specifying the URLs, the labels are seeking to conscript all of these companies as investigators who must chase down the defendants and block every website they use, under any name. Neither copyright nor trademark law allows courts to put this burden on Internet intermediaries, and for good reason: it’s prohibitively expensive for many, it inevitably leads to blocking of lawful speech, and it gives a big advantage to established players.

Finally, and perhaps worst of all, the record labels want to ban “any applications” that might “interoperate” with with youtube-mp3.org and any other websites owned by the defendants. That would seem to require every Web browser, mobile app, and Internet-connected device to block an ever-changing list of websites. Left unchecked, these kinds of orders could become a mechanism whereby the content industry gets veto power over online innovation.

Also, according to the lawsuit, which was filed in California, the site is owned by a guy in Germany, Philip Matesanz. An RIAA press release notes that the IFPI has also indicated it's going to file a similar case in the UK. Considering that there's a decently high chance that the guy in Germany won't bother responding to a lawsuit halfway around the world, the RIAA and its labels may simply be hoping for a default judgment, which they can then use to force all those third parties into blocking a website, despite a lack of a full trial over the issues with the case.

And, oh boy, does this lawsuit have serious issues. On a conceptual level, how is what this site is doing really all that different from a VCR in recording a TV show? In this case, it's just recording an audio file from a video file. And such recordings for personal time shifting uses are considered fair use and not infringing. It's also quite a useful tool for other fair use activities too — we've used a similar site to grab audio quotes from videos for discussion in our podcast. The "stream ripping" site is just a tool for making such fair use recordings, meaning it has substantial non-infringing uses. So why do the RIAA and these labels insist that it's infringing?

The lawsuit notes that this service likely violates YouTube's terms of service, but YouTube/Google are not the plaintiff. They're not the ones arguing over the terms of service being violated (in fact, you could argue that Google is a target of the lawsuit via the third party injunction attempts discussed above).

Part of the lawsuit alleges that YTMP3 violates the DMCA by "circumventing" YouTube's "technological measures" designed to block access to the actual video file, but it's not clear how this kind of thing is really a technological protection measure under the DMCA. All it does is obscure the full URL, but still make it accessible. Is it really circumvention to figure out how to get to a publicly accessible URL? That seems like a big leap by the RIAA:

Plaintiffs are informed and believe, and on that basis allege as follows: YouTube has adopted and implemented technological measures to control access to content maintained on its site and to prevent or inhibit downloading, copying, or illicit distribution of that content. YouTube maintains two separate URLs for any given video file: one URL, which is visible to the user, is for the webpage where the video playback occurs, and one URL, which is not visible to the user, is for the video file itself. The second URL is generated using a complex (and periodically changing) algorithm – known as a “rolling cipher” – that is intended to inhibit direct access to the underlying YouTube video files, thereby preventing or inhibiting the downloading, copying, or distribution of the video files.

That second URL is not "protected" in any real way. It's a publicly accessible URL — it's just that YouTube doesn't make it easy to find. So does that really count as circumvention? That seems like a big question here as well.

Either way, as noted above, these important questions may not get answered if YTMP3 simply decides to ignore the lawsuit — and the RIAA may very well be counting on that. It really does seem like the labels deliberately picked a site that is likely not interested in defending this lawsuit, no matter how questionable, allowing it to really go after a ton of 3rd party sites and services, as if SOPA were the law.