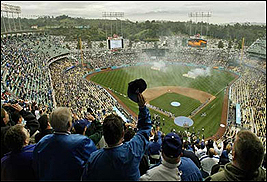 "Everybody is seeking corporate relationships," William Morris chairman Jim Wiatt told the LA Times "It's expensive to keep competitive and have the best facilities."

While no specific companies have yet been identified, it is expected that opportunities will be actively pursued. Elements of the ballpark that may potentially be branded include parking lots, gates, outfield pavilions, the press box, the stadium club, luxury suites and the clubhouse. The team's new training facilities in Arizona are also on the table.

Firms that invested in naming rights would, in addition to the obvious branding opportunities, be able to participate in special promotions such as the bullpen sponsor being able to host private party in the bullpen area of the stadium.

The proceeds from these naming rights deals will help the team to underwrite the estimated $500-million refurb of the 47-year-old stadium which the team hopes will turn it into year-round destination for dining, shopping and entertainment. Construction is set to begin within the year and would add a Dodgers museum, a "green" zone with up to 2,000 trees around the stadium, parking structures and a plaza behind the stadium connecting to shops and restaurants.

Some observers have expressed concern that the explosion of corporate branding will alienate fans. Similar concerns led to the Yankees entering into a deal with CAA last year to create a non-naming rights naming rights deal for the new Yankee Stadium in New York, where branding would be handled in a decidedly subtle fashion. The William Morris Agency seems cognizant of these concerns and has stated that they are looking for appropriate partners to work with in any such agreement.

"The Dodgers are a highly professional organization," Wiatt told the Times "We want to keep the class and integrity of this franchise." – CelebrityAccess Staff Writers