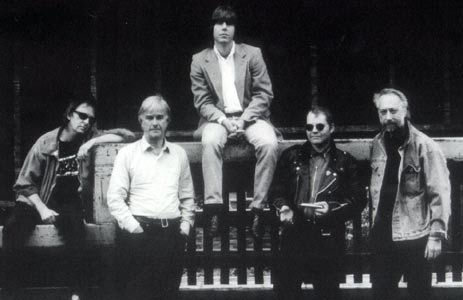 The Yarbirds, the seminal British rock guitar band, first with Eric Clapton, then with Jeff Beck and finally with Jimmy Page before he formed Led Zeppelin, is back. The Yardbirds is putting the finishing touches
on its first new studio recording since "Little Games" in 1968.
"Birdland" will be released on April 22
on Favored Nations Recordings, Steve Vai's imprint.

Jeff Beck guests on "My Blind Life." Other
special guests include guitarists Brian May (Queen), Steve
Vai, Slash, Joe Satriani, Steve Lukather,Slash, Johnny Rzeznik and Jeff "Skunk"
Baxter. Producer Ken Allardyce (Weezer, Fleetwood Mac, Green
Day, Goo Goo Dolls), actually saw the Yardbirds open for the
Beatles at Hammersmith Odeon in 1964 and has been a fan ever
since. The album contains newly recorded versions of eight of
the Yardbirds' best known hits — "I'm Not Talking," "The
Nazz Are Blue," "For Your Love," "Train Kept A Rolling,"
"Shapes of Things," "Over, Under, Sideways, Down," "Mr. You'-
re A Better Man Than I" and "Happenings Ten Years Time Ago"
— plus seven new songs.

"To make our first album in so many years has been a lasting ambition of ours," Dreja said. "We
wanted to do our original songs and our new ones with modern
production while preserving the essence of our sound. It was
a labor of love, and we're grateful to everyone who helped
— our guest musicians and especially to Steve Vai. To me,
it doesn't sound like we've been away for 35 years. The Yardbirds are still a kick-ass, high-energy band — and that
comes across on this album."