LOS ANGELES (CelebrityAccess) From sea to shining sea, and overseas, and Downunder, Fergie’s rendition of the National Anthem Sunday night is being panned.

The oft-times Black Eyed Peas singer led off festivities for the NBA All-Star Game at the Staples Center in Los Angeles with a breathy, sexy, growling version of the song but not only is the consensus that it didn’t work, but that it may be one of the worst renditions of all time.

Late-night host Jimmy Kimmel, in attendance, was reportedly caught snickering, as was player Draymond Green (although some claim he was only laughing at himself because the cameras caught him with a stupid look on his face).

Draymond started cracking up while Fergie was singing the national anthem pic.twitter.com/3pMlgjGdYC

Some still held that Carl Lewis’ rendition was the worst, but others said Fergie may have taken the crown.

Me: #Fergie#NBAAllStar2018 National Anthem was THE WORST!
Carl Lewis: Hold my beer pic.twitter.com/J0A8lFU9Gm 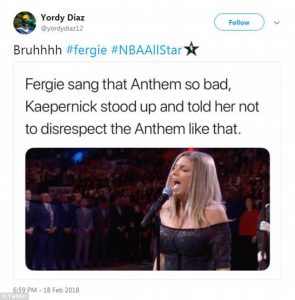 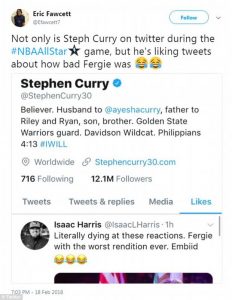