LAS VEGAS (CelebrityAccess) “Raiding The Rock Vault” and “Raiding The Country Vault”–two of the most successful shows and brands in Las Vegas and Branson, Missouri, respectively–will be launched as worldwide concert tours in 2019. The show’s producers, “Sir” Harry Cowell and Simon Napier-Bell, have announced that touring dates are now being booked for America, Canada, the U.K., Europe, Japan and South America. On top of this, the two impresarios reveal that plans are now in the works for “Raiding The Latin Vault” and “Raiding The Metal Vault” in 2019/2020.

“Raiding The Rock Vault” brings the history of rock ‘n’ roll to life–featuring classic anthems from the 1960’s through the 1980’s by the biggest acts in music–performed by a rotating all-star line-up. The show has logged over 1,300 performances in Las Vegas since launching in 2013 and been seen by over 680,000 people, including 60,000 from the U.K. The ultimate rock experience, “Raiding The Rock Vault” is the winner of the Las Vegas Review-Journal‘s “Best of Las Vegas” for 5 years in a row, a distinction which no other Las Vegas show has achieved. The show continues its triumphant run at Vinyl inside Hard Rock Hotel & Casino Las Vegas. For more information on “Raiding The Rock Vault,” visit www.raidingtherockvault.com, Facebook, Twitter and Instagram.

“Our vision was always to tour ‘Raiding The Rock Vault,'” explains “Sir” Harry Cowell, “but four days after we played our first show in downtown Los Angeles (in 2012), I was invited to Las Vegas where Rick White at the Hilton offered us a home and the rest as they say is history.  We are now ready to tour both shows in 2019.”

“‘Raiding The Rock Vault’ was originally conceived as a road show,” says music industry legend Simon Napier-Bell. “We were side-tracked into opening in Vegas–and what a wonderful, happy, successful side-track that has been. But now it’s time to do what we originally planned.” 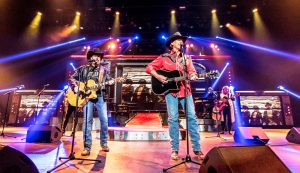 Explaining the chemistry behind “Raiding The Rock Vault” and “Raiding the Country Vault,” Napier-Bell says: “These shows are unique. They don’t depend on audio-visual technology, they take the audience through a lifetime of emotions simply through music.” Adds Cowell: “Quite simply, people leave happy and want to tell the world how great the show is–they actually make a point some nights to track me down in the venue to tell me.”

“There are no other shows like this out there plus they have great teams behind them,” says Cowell. “These songs have been the soundtrack to people’s lives,” concludes Napier-Bell about the appeal of both shows. “When they leave they feel they’ve just re-lived their entire existence. It’s cathartic.”

Steve Lacy Announces ‘Give You the World’ 2022 North American Tour