(CelebrityAccess) – On February 2019, Girlpool will release their third full length LP, What Chaos Is Imaginary. In anticipation, today, the Los Angeles duo are offering the album’s title track. Spatially, it’s Girlpool’s most expansive moment yet, with dutiful church organs and a vast orchestral outro in lieu of guitar. The track was written by Tividad, who described as “very close to her heartmind.”

“I wrote it at the most vulnerable point I have ever had thus far in my life. I was living very far from ‘home’ and not taking the best care of myself on any level… no matter what I did, I was getting into situations that were emotionally, spiritually and physically putting me at some type of risk,” said Tividad in a press release. “This song is about reckoning with this-trying to find a path to forgiving myself, attempts to redevelop a relationship with the world where I could find some illusion of ‘safety’ and belief in the fact that I could ultimately take care of myself.

Stream the song, and peep Girlpool’s upcoming tour dates, below. What Chaos Is Imaginary is out February 1 via ANTI- Records.

The music Cleo Tucker and Harmony Tividad release as Girlpool occupies a transient space. Their constant evolution makes it perfectly impossible to articulate exactly where their project falls within the contemporary musical canon; this is one of the many reasons Girlpool’s music is so captivating.

Never before has a group’s maturation been so transparently attached to the maturation of its members. This is due in large part to the fact that Girlpool came into existence exactly when Girlpool was supposed to come into existence: at the most prolific stage of the digital revolution. Both online and in the flesh, Tividad and Tucker practice radical openness to the point where it may even engender discomfort; this is exactly the point where it becomes clear why theirs’ is such a special project: they accept the possibility of discomfort—Chaos—and show you how to figure out why you might feel it. This is achieved through their ability to empathize as best friends and partners in creation, with the intention of making music that provokes.

They met in November of 2013, and released their self-titled EP just 3 months later. Both were playing in multiple bands at the time. Harmony was 18. Cleo was 17.

The growth they have fostered in one another over the years explains the project’s disparate discography; each record is a photograph of Girlpool, growing over time. Their roots are a certain shade of punk—organized chaos dressed as earworms. “Where You Sink,” one of the first singles off their upcoming record, What Chaos Is Imaginary, gives you an idea of how much things have changed since 2014.

What Chaos Is Imaginary is a collection of songs unlike any Girlpool songs you’ve ever heard, exactly what Powerplant was to Before The World Was Big. For the first time, it is clear who wrote what song. 2019 will see drum machines and synthesizers and beautiful/new harmonies and huge guitars and at least one orchestral breakdown by a string octet.

“It was invigorating playing stripped down and raw when Girlpool began. As we change, what gets us there is going to change too.”It’s hard to imagine what might follow What Chaos Is Imaginary. Girlpool’s growth has a steady momentum forward, towards something greater with every stride that they take. By the time the record comes out, they’ll be far from here, wherever here is. 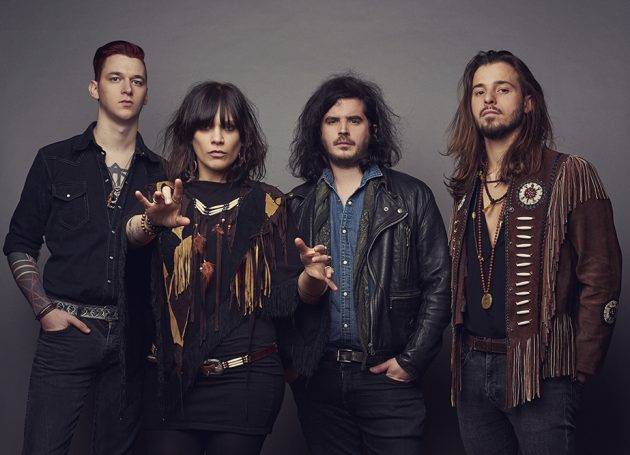