(Hypebot) In this article, Oisin Lunny shares a dire warning from Scott Cohen, the enigmatic music tech pioneer affiliated with company’s like, Spotify, The Orchard, and the British Phonographic Industry. In a recent keynote presentation, Cohen warned a massive industry sea change would likely soon reshape the music business entirely.

Editor’s note: This article has been updated to reflect that Cohen previously announced he was stepping down from his role at The Orchard.

By Oisin Lunny. This article originally appeared on Forbes

Scott Cohen is something of an enigma in the music industry. He is both an understated mensch who discreetly supports artists and music tech startups (such as a nascent Spotify) and a power player who advises industry bodies like the British Phonographic Industry. His career in music began in the late 80s as an artist manager, but he foresaw the future impact of technology on the business while many others dismissed it. There is an elegant symmetry to his big idea becoming a successful company that was sold back to the industry for over $200 million.

His pitch for what was to become The Orchard was a distribution company for the digital music age. However, most record label executives scoffed at the concept of a digital music marketplace at the time, and so the sofa-surfing Cohen bootstrapped his early days. He found a career-defining collaborator and ally in fellow maverick Richard Gottehrer, who co-founded Sire Records with Seymour Stein in 1966. A canny music executive, performer and co-writer of hits like “I Want Candy“, Gottehrer got the concept, and they co-founded The Orchard in 1997. Today, The Orchard is recognized as a pioneering music and video distribution company and it operates in more than 40 global markets. It was fully acquired by Sony for $200m in 2015.

“Today no-one can conceive of a world

which is post-streaming or post-fan.”

Given the prescience of his vision, Cohen is in high demand as a mentor and public speaker. At the Eurosonic Nooderslag (ESNS) conference in Groningen earlier this month, he looked into the future with his keynote presentation “Racing Off The Cliff – What Comes After Streaming?” 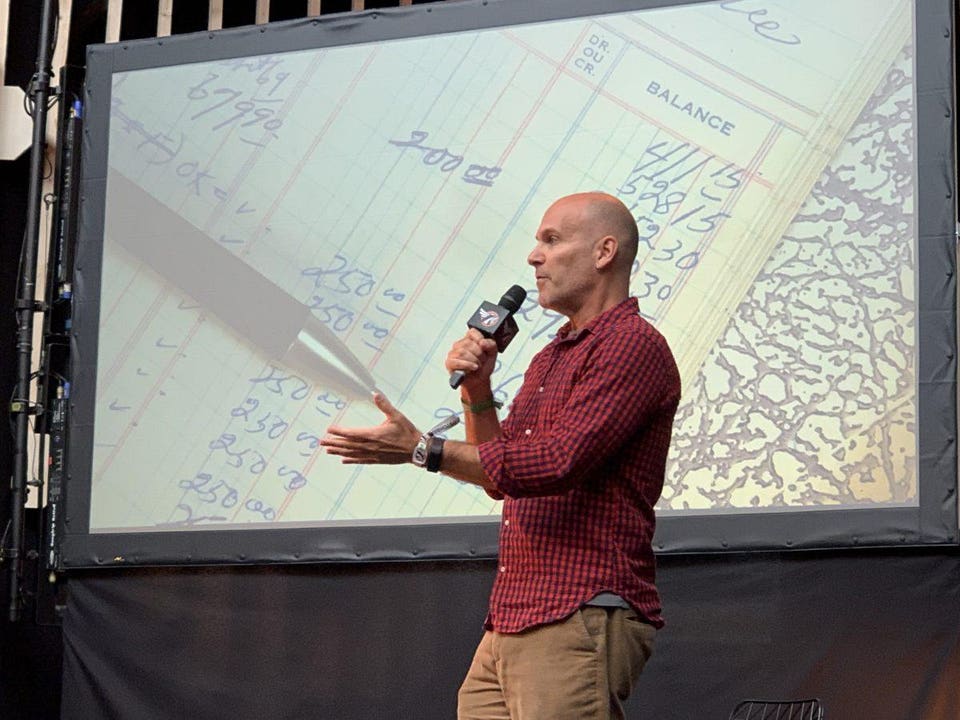 Cohen started by inviting the packed auditorium to remember the music industry 10, 20, 30, 40 and 50 years ago. “In the 80’s rap music was dismissed as a fad, in the 90s no-one in the industry could imagine a world without MTV. Today no-one can conceive of a world which is post-streaming or post-fan. Every ten years something kills the music industry. If you want to know what’s next look at the tech world.”

Artificial Intelligence (AI) was a key trend for Cohen. “AI is something that our business relies on today for organization, recommendation and search. There are 20,000 new tracks uploaded to Spotify every day, do you seriously think that humans are listening to every track and categorizing them?” The overlap of big data and AI has resulted in the death of the music genre as a marketing concept, he continued. “Searching by genre doesn’t exist anymore. New Music Friday or your Daily Mix on Spotify are not genres. Tracks get into your AI-driven playlists because they are good. The biggest iTunes track of 2017 was Despacito, one of 2018’s biggest acts was BTS from South Korea, they had two albums debut at #1 on the Billboard 200. In the genre-driven world, these would have just been labeled World Music.”

Cohen explained how fans of BTS are not only redefining the term “fan” but offering a glimpse into a “post-fan” world. The self-organizing “BTS Army” surprised the bands’ UK concert promoters by crowdfunding a billboard to welcome their idols to London. In South Korea, the BTS Army regularly pay for billboards to celebrate the band’s anniversaries, concerts and birthdays. The US branch of the BTS Army clubbed together for billboards in Times Square to support the band and camped out for over a week to secure tickets for their first stadium concert in the United States. Cohen said that the industry needed to empower this level of passionate fandom. “Today bands need to create the environment for this relationship with their fans, and to help them do things by themselves.”

The world domination of BTS segued neatly into another of Cohen’s big predictions, a “post-West” music industry. “The global population is 7.7 billion people, but Europe, the US and Canada only amount to 1.1 billion. What about the other 6.6 billion people, are you targeting them or ignoring them? If you ignore them you are in serious trouble. India has a population of 1.3 billion, and many millions of people in India have a good quality of life. There are 4.4 billion people in Asia, many of them have mobile phones and are becoming more affluent. As an industry, are we thinking about this at all?” Cohen contrasted the high percentage of younger people in developing nations with the aging populations of the West and was frank about the prospects of merely transposing a Western-focused mindset. “They don’t want our shit; they have their own music.”

“For anyone under 20, their mindset is,

who cares, give me the hits.”

Cohen continued in a controversial vein, puncturing one of the most sacred cows in the industry, the album format. “The album was artificial when it started; record companies invented the format to generate more money. Today there is no album. For anyone under 20, their mindset is ‘who cares, give me the hits'”. He also spelled out the end of our current paradigm of infinite choice. “The experiment of the unlimited web has in some ways failed. Twenty thousand new tracks are uploaded to digital services every day. Access to ‘everything’ is too much! We need to move to a new model of trusted recommendations.” Social media in its current iteration is also wide open for disruption, he continued. “Social media is not what it once was. Today there are only three elements: the users, the platforms which sell the users’ data, and the brands who sell stuff to the users. Imagine a future where we take the brands out of the picture. Younger people are creating their own ad-hoc networks already. Blockchain could be the autonomous technology that facilitates an entirely new way of people connecting with music.”

Cohen highlighted the pivotal importance of the live music industry but challenged it to be more innovative. “Glastonbury sold out in 37 minutes with no lineup because people have a genuine hunger for shared experiences. Is the live industry doing the most possible or the least possible? We need to create new live music experiences.” The role of virtual reality (VR) and augmented reality (AR) was currently underestimated, he continued. “AR is going to have a major impact on the music industry, but almost no one is doing anything about it. Mixed reality is being used by SAAB to help build fighter jets, but in the music space we just have dead people coming back as holograms. We need to be more creative. What’s the point in just going to a gig in VR, I want to experience something that can’t happen in real life! Let’s create completely new experiences using music. If you think that mixed reality isn’t interesting, you’re probably going to be replaced.”

” What would ‘Dark Side Of The Moon’ sound like with AI,

Next, Cohen deconstructed a concept which is central to popular music: the pop star. “To begin with we just had our voices to express ourselves. Musical instruments were invented around 30,000 years ago, but it was only recently that purely electronic instruments were made, ones which had no manifestation in physical space. Our next evolution will be to AI generated music. Movie editors currently use AI to deliver exactly the right music, perfectly in time with the film cuts, and changes can be made in seconds. Machines can write great music, and they have no ego. Instagram completely democratized photography, so will we use AI to help create music like we use spellcheck when typing now? Wait until musicians really get into working with AI and see what they can create. What would ‘Dark Side Of The Moon’ sound like with AI, what would Pink Floyd do in 2019?”

After an hour of future gazing, the ESNS delegates filtered out of the auditorium, pondering what an AI-driven, post-fan, post-West, mixed reality, blockchain-powered future might look like. Is the broader music industry asking the same questions, or are they convinced that the future is inconceivable without our current streaming paradigm? If something kills the music industry every ten years as Cohen suggests, we won’t have to wait too long to find out.

Eric Clapton Cancels Two Shows After Coming Down With COVID-19