NEW HAVEN, CT (CelebrityAccess) — Brian Phelps, owner of the New Haven nightclub Toad’s Place has co-written a new memoir about his years operating the club and sharing some of his favorite stories from the concert venue’s 40 year history.

The 750-capacity Toad’s Place, strategically located between New York City and Boston, has consistently punched above its weight class in attracting top tier talent to its stage over the years. In 1978, Bruce Springsteen was in New Haven and dropped into Toad’s unannounced for a surprise show. 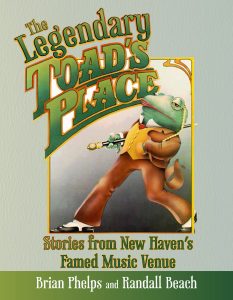 The Rolling Stones, preparing for their ‘Steel Wheels’ tour also played a surprise gig at Toad’s Place in 1989, treating 700 fans to an unforgettable night of arena rock in an intimate club setting.

Other major acts to grace the stage at Toad’s include Bob Dylan, U2 on multiple occasions, Slayer, The Black Crowes, Billy Joel, Cyndi Lauper, and Dream Theater, among others.

Toad’s place, which was originally opened as a French restaurant by Michael “Big Mike” Spoerndl in 1975, quickly transitioned to a concert venue, hosting shows by the likes of Muddy Waters, Koko Taylor, and John Lee Hooker. Phelps joined as club manager in 1976 and later joined Spoerndl as a business partner and in 1998, assumed ownership of the storied concert venue.

In the book, Phelps details his experiences in operating the club, recalling the legendary shows and behind-the-scenes stories from the club’s past.

The book was co-written by Randall Beach, a noted local rock critic who has written for the New Haven Advocate, the Hartford Courant, the New Haven Register, and Billboard magazine, among other publications.

“The Legendary Toad’s Place: Stories from New Haven’s Famed Music Venue” is due to hit the shelves in October.

Desert Daze Returns This Summer As An In-Person Festival