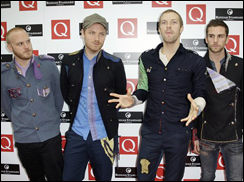 LONDON (Hypebot) – Lots of bands give music away free, but few superstars do it. Coldplay did and did it right. This guest post from Australian music industry veteran Nick Crocker shares some lessons learned.

Earlier this year, Coldplay gave away a free mp3 of "Violet Hill", the first single from their album "Viva La Vida or Death and All His Friends". By delivering genuine value to fans in an original way, Coldplay generated press coverage worldwide. It was the act of a band at the top of its game and extended Coldplay's fan database, almost overnight, by 300,000.

A Coldplay single in exchange for an email address and a postcode is a fair swap. But the true value of the exchange lay in the connection Coldplay made with those 300,000 fans. From that initial exchange, the challenge was how to use email to turn that list of email ad-dresses into a global tribe of passionate Coldplay advocates.

When done properly, email marketing is about the recipient – not the sender. For a band it's about engaging fans in conversation by delivering anticipated, relevant and personal messages to them. Following Coldplay's model will make sense for a lot of bands so here are the ten things the Coldplay model can teach us about email marketing in music.

1 – Keep your promises. After submitting details, the download link took three days to arrive. Coldplay can be forgiven for not anticipating such an overwhelming response but other bands should make sure they are prepared for an immediate exchange.

2 – Hit me with your best shot. The email link arrived in the form of a text email and a long URL link. Even at the automated response stage, bands need to engage. Make the download link nice and simple ('click here' for example) and then add value by running a competition, delivering a link to a personal message from the band or letting fans pre-order the album.

3 – Ramp up pre-orders. The free mp3 is a terrific hype generator for an album's release. Why not channel that hype into immediate sales by letting people pre-order the album on iTunes/Amazon mp3 or a direct-to-consumer mini site while they are downloading the free mp3? Better still, to motivate fans to pre-order, include exclusive content or merchandise in the deal.

4 – Nail your timing and style. Coldplay send roughly one email a month to their fans. That's the perfect frequency. And they keep things stylish, even in the notoriously ugly world of HTML. Perfecting the frequency and appearance of the emails is a threshold requirement for effective email marketing.

5 – Geo-target your message. If you take postcodes in the download process, use that information to segment your database geographically. Coldplay send blanket news of appearances on US TV and shows at French music festivals. With segmentation they could target their message and make it more relevant. When fans in Brazil are informed about TV appearances in the UK, they are distanced. That distance increases the likelihood the email won't be opened next time.

6 – Remember, it's about them, not you. Since the download, 70% of the calls to action within Coldplay's emails outlined what fans could do for the band. Only 30% related to Coldplay doing something for fans. Email marketing, like a friendship, works best when the exchange is 50/50. When you give people more value, you increase the chances they will talk positively about you to others.

7 – Cater to uber fans. Premium packages are a great alternative to merely announcing the album's release in an email. For example, Coldplay could have offered tiered pack-ages ranging from a digital only album to a deluxe offering including a t-shirt, a digital copy of the album, a CD, a DVD, some vinyl, signed cover artwork, and a ticket to an upcoming show. Fans come with different needs and wants and it can be profitable to cater to them all.

9 – Two ears one mouth – to be used in proportion. 300,000 fans on a database is a golden opportunity for market research. Find out what fans want, where they go for music news, where they buy or download music and what social networks, forums and blogs they engage with. Listen and learn.

10 – Attention is everything. Coldplay did a good job of engaging fans' interest. But your band could do better. Attention is the real opportunity of the digital age and maintaining that attention over time is the real challenge.