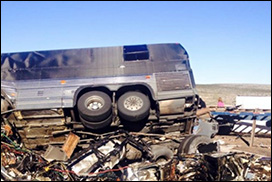 EL PASO, TX (CelebrityAccess) — The tour bus of the Los Angeles-based metalcore band The Ghost Inside was involved in a serious motor vehicle accident in Texas that left two dead and 10 injured.

According to Reuters, the band's bus collided head on with a tractor trailer while on a rural two-lane road. The crash killed the drivers of both vehicles and left all members of the band seriously injured.

The Texas Department of Public Safety said the cause of the crash, which took place near El Paso, has not yet been determined.

"All 5 band members and all members of the crew are alive and currently being treated for their injuries," a statement on The Ghost Inside Facebook page said. "Please keep them in your thoughts as well as their bus driver and those in the other vehicle who did not make it."

The names of the two people who were killed in the crash were bus driver Gregory Hoke of Texas and truck driver Steven Cunningham of New Mexico, the department of public safety said.

In the wake of the collision, the band has canceled all of their upcoming tour dates and launched a gofundme page to help defray the costs of medical expenses and lost gear.

"I am really struggling to find words today for what the last 24 hours have brought. First and foremost I would like to send my condolences to the families of the two drivers that lost their lives in the accident yesterday. I hope that their loss is not forgotten in all this tragedy. Secondly I have to say that the amount of actual assistance being provided to all of us is nothing short of overwhelming. Far beyond thoughts and prayers but actual tangible help that will go a long way in what is sure to be a lengthy recovery. At this moment everyone has family with them and they are being treated by incredible medical staff here in El Paso. I know everyone is anxious for information. It will come when it's appropriate. For now know that everyone's condition is stable or better and the love you are raining down during this unthinkable time is felt by the ones that need it most. Thank you from the bottom of my heart. TGI forever," said band member Jim Riley on the band's crowdfunding page. – Staff Writers