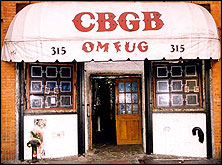 Music clubs come and go in New York City, but more seem to be going, or on the verge of going. The Lower East Side's Luna Lounge is closing on Ludlow Street at the end of the month after 10 years with the owners looking for a new location nearby on Essex Street or perhaps in the trendy, but over hyped, Williamsburg, Brooklyn. The current rent is $5,700, but the one-stroy building will be demolished along with several adjoining ones for a large apartment complex.

Fez, the subterranean East Village club at the Time Cafe on Lafayette Street, has posted its final show for March 17. The Time Cafe plans to expand its popular restaurant and a music club is no longer in its plans for the intimate basement space.

Ther Lower East Side's Tonic on Norfolk Street is holding a Webathon to raise money as well as benefit concerts at the club, including the intriguing booking of Yoko Ono & Sean Lennon on February 19. Tonic has had a coupling of bad fortunes recently, including a flood, robbery and a sewer line collapse and needs to raise $100,000. Tonic's rent has doubled since it opened in 1998, and its insurance has tripled since 9/11.

The East Village's CBGB on the Bowery is going through a painful lease renegotiation. With its lease expiring in August, the rent will be increased, maybe doubled. When Hilly Kristal opened the punk mecca in 1972, the rent was a manageable $600 a month. The New York Post reports that the rent could go as high as $40,000 a month or almost double what Kristal told the Village Voice he pays now. The liability insurance is now $80,000 a year. "We're not closing," Lisa Kristal, Hilly's daughter, told the Post. "We're trying to negotiate." –Bob Grossweiner and Jane Cohen