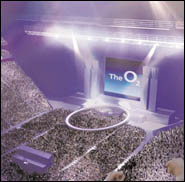 LONDON (CelebrityAccess MediaWire) — AEG Europe’s O2, the famous venue for concerts thrown by Prince and The Rolling Stones, had to be evacuated October 29th at 8.30pm after the refrigeration unit's alarm went off.

A spokeswoman said 31 workers at the venue in Greenwich, formerly the Millennium Dome, were treated for minor injuries after the gas leaked from the ice rink plant to the outside of the arena through an air vent on Monday night.

No members of the public were harmed and the London Fire Brigade and Health and Safety Executive are investigating. A total of 31 members of staff were reported to have suffered ammonia inhalation and 27 were taken to hospital with minor injuries.

The London fire brigade arrived at 8.45pm to the Greenwich venue to attend to the leak coming from the arena's refrigeration plant room. Firemen deemed the building safe at 10.30pm.

The building reopened as usual at 10am the following day (October 30). O2 confirmed the investigation involving Greenwich council is ongoing and the reason for the leak has yet to be identified.

The O2 arena ground can be changed between ice rink, basketball court, exhibition space, conference venue, private hire venue and concert venue within hours. This is possible as the bottom layer of the arena ground is an ice rink which is constantly maintained. This can then be covered with insulation material to become a dry surface. A wooden stage or any other material for any event can then be laid out on top of this.