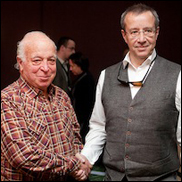 TALLIN, Estonia (VIP NEWS) — The fifth edition of Tallinn Music Week had 748 delegates at the sold out conference .

In the upcoming weeks TMW delegates and public will select this year’s Skype award winner who will receive 3500 EUR to develop its career. The voting lasts until 18th April on the festival website www.tmw.ee.

The festival concerts took place in most prominent music clubs and concert halls in Tallinn – 233 artists and bands from 19 countries performed, 167 of them from Estonia. The Citystage programme that was started last year had another successful edition, bringing the festival buzz to bookshops, music stores, galleries and cafés with free afternoon concerts.

The festival welcomed a true legend of music industry, Seymour Stein, who was presented with an Award for Cultural Diplomacy by the ambassador of the United States in Estonia Jeffrey Levine, who commented: „We created this award to honor those individuals and groups whose outstanding work in the field of culture advances the Embassy’s goals of mutual understanding and the deepening of friendship between the United States of America and our friends overseas. With the profound influence Mr. Stein has had on the musical culture of the United States, I can think of no one more deserving of this award.“

748 music entrepreneurs and representatives of music organizations participated at the conference, 381 of them from abroad and 367 from Estonia. There were participants from 30 countries, a large number from Finland, Latvia, Germany, UK, Russia, Lithuania, Sweden, Norway, Poland and Denmark.