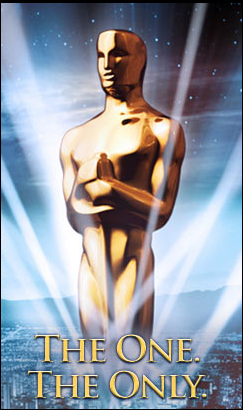 BEVERLY HILLS, CA (AP) — "No Country for Old Men" and "There Will Be Blood" led with eight Academy Awards nominations each Tuesday, among them best picture and acting honors for Daniel Day-Lewis and Javier Bardem _ but it remained in doubt whether any stars would cross striking writers' picket lines to attend the ceremony.

"No Country for Old Men," a crime saga about a drug deal gone bad, and "There Will Be Blood," a historical epic set in California's oil boom years, will compete for best picture against the melancholy romance "Atonement," the pregnancy comedy "Juno" and the legal drama "Michael Clayton."

"Atonement" and "Michael Clayton" trailed with seven nominations each, including best actor for George Clooney in the title role of "Clayton." The lead players in "Atonement," Keira Knightley and James McAvoy, were shut out on nominations, however, with teenager Saoirse Ronin the only performer nominated for that film, for supporting actress.

Past Oscar winner Cate Blanchett had two nominations as best actress for the historical pageant "Elizabeth: The Golden Age," and as supporting actress for the Bob Dylan tale "I'm Not There."

On strike since Nov. 5, the Writers Guild of America refused to let its members work on the Globes, which prompted stars to avoid the show in solidarity. Globe organizers were forced to scrap their glitzy telecast and instead announce winners in a swift, humdrum news conference, without anyone on hand to accept the prizes.

Guild leaders have said that if the strike continues, they will not allow writers to work on the Oscars, either, which might leave nominees and other celebrities forced to choose between attending the biggest night in show business or staying home to avoid crossing picket lines.

The acting categories generally played out as expected _ with a few surprises, including best actress nominee Laura Linney for "The Savages" and best-actor nominee Tommy Lee Jones for "In the Valley of Elah." Neither performance had been high on the awards radar so far this Oscar season.

Best actress looks like a two-person duel between Julie Christie, an Oscar winner for "Darling," as a woman succumbing to Alzheimer's in "Away From Her" and Marion Cotillard as singer Edith Piaf in "La Vie En Rose." Both won Golden Globes, Christie for dramatic actress, Cotillard for musical or comedy actress. Yet they face strong competition from Blanchett, Linney and relative newcomer Ellen Page as a whip-smart pregnant teen in "Juno."

Day-Lewis, an Oscar winner for "My Left Foot," grabbed another best-actor nomination as a flamboyant oil baron in "There Will Be Blood," for which he could emerge as the favorite.

Along with Day-Lewis, Clooney and Jones, the other nominees were Johnny Depp, who won the Globe for musical or comedy actor as the vengeful barber in "Sweeney Todd," Viggo Mortensen as a Russian mob member in "Eastern Promises."

With a Golden Globe and universal acclaim for his performance as a relentless killer, Bardem looks like the closest thing to a front-runner this Oscar season, which is unusually wide open for best picture and other top categories.

Snubbed along with Knightley and McAvoy was "Atonement" director Joe Wright. The directing nominees were Paul Thomas Anderson, "There Will Be Blood"; Ethan Coen and Joel Coen, "No Country for Old Men"; Gilroy, "Michael Clayton"; Jason Reitman, "Juno"; and Julian Schnabel, "The Diving Bell and the Butterfly."

The Coens and Anderson also were nominated for writing the screenplay adaptations of their films.

The wide-open awards season had left the field up in question, and some other notable prospects were shut out, including past Oscar winner Angelina Jolie for "A Mighty Heart," Helen Bonham Carter for "Sweeney Todd," and Emile Hirsch for "Into the Wild." Sean Penn also missed out on a directing nod for "Into the Wild," as did Eddie Vedder, who was shut out in music categories.

Also left out of the Oscars completely was the hit musical "Hairspray."

The fairy-tale comedy "Enchanted" had three of the five best song nominations.

Michael Moore _ who castigated President Bush over the Iraq War in his best-documentary acceptance speech for "Bowling for Columbine" in 2003 _ is back in Oscar contention with his health-care documentary "Sicko."

War-on-terror documentaries dominated the category, with "Sicko" up against "No End in Sight," "Operation Homecoming: Writing the Wartime Experience" and "Taxi to the Dark Side."

Even if the strike lingers, Oscar organizers insist their show will go on, with or without writers.

"We're dealing with contingencies but we're thrusting ahead. The point is, we're going to have a show, and we're going to give these incredible artists what they're due. We're going to present the Oscars on Feb. 24, and that is the important thing. Artists are giving their fellow artists a one-time event in many of their entire lives," said Sid Ganis, president of the Academy of Motion Picture Arts and Sciences.

A glimmer of hope arose late last week as the Directors Guild of America reached a deal with producers for a new contract. Many in Hollywood are counting on that deal to help resuscitate negotiations between writers and producers, who walked away from the table Dec. 7.

If the two sides settle their differences in time for the Oscars, the ceremony would become a dual celebration, honoring the best in Hollywood from the previous year and the end of a season of labor discontent that idled TV shows, delayed some movies and threw thousands of production workers into unemployment.

The tentative contract for directors addressed a key issue for writers _ pay for films and TV shows that end up on the Internet and other new media. But whether the terms of the directors' deal would satisfy writers remains uncertain.

Oscar nominees are chosen in most categories by specific branches of the Academy of Motion Picture Arts and Sciences, such as actors, writers and directors. The academy's full membership of about 5,800 was eligible to vote for best-picture nominations and can cast ballots for the winners in all categories at the Oscar ceremony itself.

Assuming the show comes off as scheduled, ABC will broadcast the Oscars live Feb. 24 from Hollywood's Kodak Theatre. Jon Stewart _ who recently resumed "The Daily Show" on Comedy Central, but without the help of his striking writers _ will serve as Oscar host, a job he also filled two years ago.

Performance by an actor in a leading role
George Clooney in "Michael Clayton" (Warner Bros.)
Daniel Day-Lewis in "There Will Be Blood" (Paramount Vantage and Miramax)
Johnny Depp in "Sweeney Todd The Demon Barber of Fleet Street" (DreamWorks and Warner Bros., Distributed by DreamWorks/Paramount)
Tommy Lee Jones in "In the Valley of Elah" (Warner Independent)
Viggo Mortensen in "Eastern Promises" (Focus Features)

Performance by an actor in a supporting role
Casey Affleck in "The Assassination of Jesse James by the Coward Robert Ford" (Warner Bros.)
Javier Bardem in "No Country for Old Men" (Miramax and Paramount Vantage)
Philip Seymour Hoffman in "Charlie Wilson's War" (Universal)
Hal Holbrook in "Into the Wild" (Paramount Vantage and River Road Entertainment)
Tom Wilkinson in "Michael Clayton" (Warner Bros.)

Performance by an actress in a leading role
Cate Blanchett in "Elizabeth: The Golden Age" (Universal)
Julie Christie in "Away from Her" (Lionsgate)
Marion Cotillard in "La Vie en Rose" (Picturehouse)
Laura Linney in "The Savages" (Fox Searchlight)
Ellen Page in "Juno" (Fox Searchlight)

Adapted screenplay
"Atonement" (Focus Features), Screenplay by Christopher Hampton
"Away from Her" (Lionsgate), Written by Sarah Polley
"The Diving Bell and the Butterfly" (Miramax/Pathé Renn), Screenplay by Ronald Harwood
"No Country for Old Men" (Miramax and Paramount Vantage), Written for the screen by Joel Coen & Ethan Coen
"There Will Be Blood" (Paramount Vantage and Miramax), Written for the screen by Paul Thomas Anderson

Studios with multiple nominations for the 80th Academy Awards: