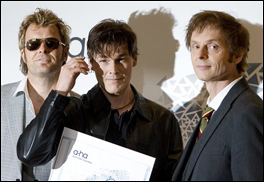 LONDON (VIP NEWS)– Pop group A-ha are to mark the 25th anniversary of their debut album with a special concert at the Royal Albert Hall in London.

The band will perform Hunting High And Low in full for the very first time at the gig on October 8th.

It will precede their Ending On A High Note farewell tour later this year.

Guitarist Magne Furuholmen said it would be a "very emotional moment" for the band, who formed in 1982.

The Norwegian band scored international hits with The Sun Always Shines On TV and Take On Me in the 1980s.

Following a break in the 1990s, the band reformed in 1998 after being invited to play the Nobel Peace Prize concert.

Their 2009 album, Foot Of The Mountain, charted at number five in the UK.

It marked a return to their synth-pop roots after a period in which they recorded guitar ballads.

Furuholmen and band mates Paul Waaktaar-Savoy and Morten Harkett, announced in October that they would perform their final shows together in 2010.

Furuholmen said: "The Royal Albert Hall has always been one of our favorite places in the world to play.

"To perform here one final time – and play our first album in its entirety, now, at the end of our career… this will be a very emotional moment for us all."

The tour began on March 4th at the Estadio Luna Park in Buenos Aires, Argentina and will end on December 4th in Oslo Spektrum in Oslo, Norway, visiting many cities in the United States, Germany, the United Kingdom and several European countries.