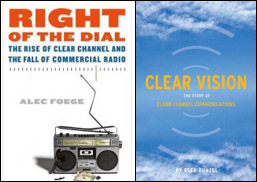 SAN ANTONIO, TX (CelebrityAccess MediaWire) — Not one, but two books on the rise of media powerhouse Clear Channel have recently landed on store shelves.

The first, entitled "Right of the Dial: The rise of Clear Channel and the fall of commercial radio" by Alec Foege attempts to chronicle the rise of the radio conglomerate and its effects on the world of commercial radio. In the book, which originally had the working title of 'The Monster that Ate Mass Media,' Foege calls the radio giant to task for what he describes as efforts to bully musicians into playing at Clear Channel venues and formulizing playlists.

According to the Wall Street Journal, Clear Channel was, perhaps unsurprisingly, less than willing to help Foege in his efforts.

"Several aspects of the project,.. raise concerns for us with regard to substance, objectivity and accuracy," wrote Lisa Dollinger, Clear Channel's communications director in a July 2005 email to Jonathan Galassi, president and publisher of Farrar, Strauss & Giroux, Mr. Foege's publishing house after Galassi attempted to secure access to Clear Channel execs for the author.

The counterpoint to Foege's polemic is "Clear Vision: The Story of Clear Channel Communications," by Reed Bunzel, former editor of the radio trade magazine Radio Ink. The book was underwritten by Clear Channel, who own the copyright to the work and while Bunzel himself refused to clarify how much he was paid for his efforts, another writer told the WSJ that Clear Channel had offered him $100,000 to take on the project.

Unlike Foege, Bunzel reportedly had excellent access, including a meeting with the Mays family and other top level Clear Channel execs. When the manuscript was complete, Bunzel submitted it to the aforementioned Ms. Dollinger, who after making some suggestions on the text, arranged for the book to be published. While the book does contain some criticisms, such as describing Clear Channel as "almost oblivious to the mounting criticism that was bombarding it from all directions," much of the book is given over to elucidating Clear Channel's triumphs.

While it is not unusual for a corporation to publish a lauditory, glossed history, it is very unusual to do so as a response to another, less salutary book.

Peter Hawes, editorial director of Greenwich Publishing, a firm that focuses on these corporate histories told the WSJ that he has never seen a situation in which a company has said, 'Hey, there's another book coming out. We don't think we're going to like it. Let's get our own book out." – CelebrityAccess Staff Writers