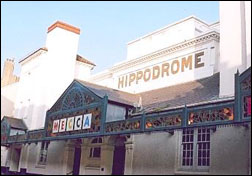 LONDON (CelebrityAccess MediaWire) — Academy Music Group Ltd (AMG) has announced the acquisition of its twelfth venue and expansion for the Group to the South Coast.AMG has successfully concluded negotiations and agreed terms on the leasehold interest of the Hippodrome on Middle Street in Brighton with Southampton property developers Urbanfirst Ltd.

An outstanding Grade II listed building, the Hippodrome dates back to 1897 as Brighton Ice-Rink, before in 1901 it was converted by renowned theatre architect Frank Matcham and renamed the Hippodrome. The following year it became one of Brighton’s principal variety theatres offering high quality entertainment to all.

Many famous performers from the music hall era graced the Hippodrome stage in the early years from comedians and singers such as Max Miller and Judy Garland. As trends in entertainment changed over the years, the 1960’s welcomed performances by both The Beatles and the Rolling Stones, playing to capacity crowds along with many other stars.

Commenting on this latest acquisition, AMG’s chief executive officer, John Northcote says: "Brighton is a great City, a location we’ve been looking into for some time. We’re delighted at the prospect of maintaining and developing a site with such history, especially as this venue still retains many of its original features and grandeur of its early years. Our aim is to bring the Hippodrome back as a quality entertainment venue, working with local bands and artists as well as major UK and international acts." – CelebrityAccess Staff Writers