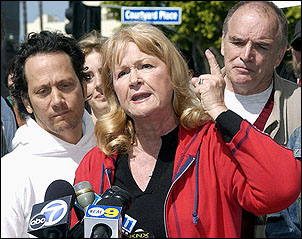 LOS ANGELES (AP) – About 50 actors gathered outside the Screen Actors Guild headquarters to oppose SAG's proposed merger with the leading television and radio actors' union, saying screen actors would not be properly represented after the consolidation.

The actors also complained at Wednesday's protest that they had been shut out of discussions that led up to Monday's merger vote by the boards of SAG and the American Federation of Television and Radio Artists.

At least 60 percent of the members of each organization must vote in favor of the merger for it to go through. Ballots will be mailed in early June, with results expected later that month.

Elliott Gould, Valerie Harper, Tyne Daly, Kent McCord, Esai Morales and Rob Schneider were among those who opposed allowing the fate of screen actors to be charted by the new umbrella union, which would represent the interests of broadcasters and movie and television actors.

"We can't take back the Screen Actors Guild if this thing doesn't work out in three or five years," said McCord, a SAG board member who voted against the merger. "This is a 'til death do us part marriage."

The star of the old "Adam 12" TV series said the merger would also cost $20 million to administer over five years and add an unneeded level of bureaucracy.

Prior attempts to merge have failed in large part because SAG members, mainly film and prime-time TV actors, have been unwilling to share power with the daytime TV actors, broadcasters and recording artists represented by AFTRA. The new consolidation plan proposes a unified umbrella group and three autonomous affiliates, representing actors, broadcasters and recording artists.

The protesters said the structure does not provide enough protection for screen actors.

"We believe as screen actors we have a unique talent and we want our union to represent the needs of screen actors," Schneider said.

Supporters dismissed much of the opposition as "fear mongering," adding that they believe an education effort to begin this week will allay many concerns.

"Actors are grouping together to form a power base against management," said Armin Shimerman, who voted against the last merger attempt but supports the present effort. "If this does not pass, we will have a battle between the two unions for jurisdiction."

Actors opposed to the merger: http://savesag.com