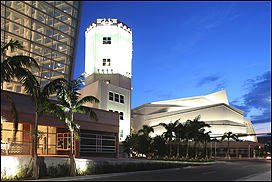 MIAMI (CelebrityAccess MediaWire) — When we last wrote about the Concert Association Of Florida, there was little good news to report – the Association had just announced that it was pulling the plug on its season at the Broward, citing little support from the venue, combined with a challenging donor climate and declining ticket sales. The latest news however is decidedly more upbeat and the Adrienne Arsht Center for the Performing Arts of Miami-Dade County has announced that six of seven performances originally slated for production by the Concert Association of Florida will still be brought to Miami audiences.

Additionally, the 50th anniversary celebration of the world-renowned Alvin Ailey Dance Company, originally scheduled to be presented by the Concert Association at the Fillmore Theatre on Miami Beach for five performances from April 16 to April 19, will be moving to the Sanford and Dolores Ziff Ballet Opera House for presentation on the same dates and times.

"When the Concert Association of Florida approached us with their unfortunate news, we knew preserving its season was in the best interest of our patrons and our community," said M. John Richard, President and CEO of the Adrienne Arsht Center for the Performing Arts. "Fortunately, the visiting companies that will perform under this partnership share our vision."

Under the agreement, the following performances will be presented at the Adrienne Arsht Center for the Performing Arts as originally scheduled: the New York Philharmonic, the oldest orchestra in the U.S. (February 26); the Dallas Symphony Orchestra, led by genius conductor and violinist Pinchas Zukerman (March 12); international superstar and legendary tenor Jose Carreras (March 13); Mariza, the world’s leading interpreter of Portugal’s impassioned fado music (March 28); and the National Philharmonic of Russia, a stunning young ensemble of gifted musicians who are the musical symbol of the new Russia (April 10).

The performance of Mark O’Connor previously scheduled at the Adrienne Arsht Center will move to the University of Miami, where Mr. O’Connor will perform with the Frost School of Music’s Henry Mancini Institute Orchestra. O’Connor is "one of the most talented and imaginative artists working in music today," according to the Los Angeles Times.

Subscription and single tickets purchased for all performances will be honored. To purchase tickets for any of these performances, please contact the Adrienne Arsht Center box office at (305) 949-6722, or visit www.arshtcenter.org.

The preservation of these productions was made possible through collaboration and shared financial expenses among the Adrienne Arsht Center, the visiting artists and the touring companies.

According to Mr. Richard, "These co-presentations are the result of an unprecedented level of cooperation not only with the visiting artists, but also with the Florida Grand Opera, the University of Miami’s Frost School of Music and the Rhythm Foundation. Their support and collaboration will help make these performances possible."

"The Dallas Symphony Orchestra has been looking forward to performing in the Adrienne Arsht Center for some time" said Doug Adams, president of the Dallas Symphony Orchestra. "When we learned of the Concert Association’s predicament and considered what was at stake, we decided that saving this concert was worth sharing in the financial obligation." – CelebrityAccess Staff Writers