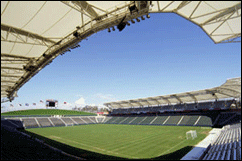 LOS ANGELES (CelebrityAccess MediaWire) — AEG, owners of Southern California’s Staples Center and the Home Depot Center, have given the city of Los Angeles some extra ammunition in its bid for the 2016 Olympic Games.

Rod O’Connor, GM of the Home Depot Center, announced that if L.A. secures the 2016 bid, AEG will expand his venue with a 125-acre project that will include a training facility and a hotel/conference center, according to the Los Angeles Times.

The project is estimated at between $50 million and $60 million, and would be an enhanced attraction to athletes from afar with an on-site place to stay and train.

The Carson, CA facility is already a hotbed of Olympic sport training, with facilities for soccer, tennis, track and field and velodrome cycling.

The U.S. Olympic Committee will decide April 14th between Los Angeles and Chicago as its candidate city for the international committee decision.

If the 2016 bid does not go to L.A., O’Connor said AEG would be considering other possible options for the facility. –by CelebrityAccess Staff Writers