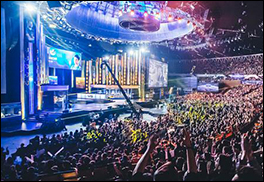 LOS ANGELES (CelebrityAccess) — Anschutz Entertainment Group has signed on for a five-year joint venture with ESL, formerly known as the Electronic Sports League, to broaden both of the two company's e-sports footprint.

The partnership will give ESL access to AEG’s international network of venues and production, ticketing, marketing and sponsorship capabilities to develop and expand e-sports live events around the world. Additionally, the two companies are looking to develop new esports events and expand the ESL’s presence in the Asia Pacific region.

"We are sitting on what we think is the evolution of a new spectator sport," said Chuck Steedman, chief operating officer of AEG Facilities. "How many times in your lifetime can you say there’s a new spectator sport out there? I don’t think it’s happened in my lifetime."

"Esports has reached mainstream status. Our tournaments are viewed by as many, if not more spectators as traditional sports, so it is a natural progression that industry events increasingly become held at world class venues,” said Steven Roberts, Executive Chairman at ESL. “Our partnership with AEG enables us to further improve the spectator experience and create additional, global events for audiences and partners

Other companies are making forays into the sector as well. WME/IMG and Turner Broadcasting recently partnered to create a league and broadcast its season on U.S. cable television. – Staff Writers