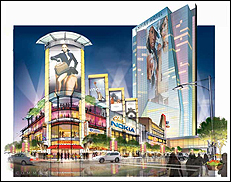 (CelebrityAccess MediaWire) — AEG has been left seeking new partners for the 56-story downtown hotel that was to be a major facet of the company’s “l.a. live” development adjacent to the Staples Center, despite a quarter-billion-dollar public financing package.

Apollo Real Estate Advisors of Century City was expected to provide about $60 million for the 1,100-room hotel, but pulled out of the talks, City Councilwoman Jan Perry told the Los Angeles Daily News.

The hotel has been touted as a linchpin in ensuring the success of the $4.2 billion sports and entertainment complex, designed to boost the ailing Los Angeles Convention Center.

Negotiations involving Apollo and co-developer Wolff Urban Development, which wasn’t providing equity, grew strained over the last several months as hotel construction costs soared from roughly $450 million to over $500 million, while the city offered no further concessions, according to the paper.

Councilwoman Perry, who represents the district where the hotel would be built, said that AEG is now looking for new equity partners.

“I’m not worried about the future of the hotel,” Perry told the paper. “(AEG) was being very active to recruit new equity partners. I know they were talking to a number of different entities.”

Sources confirmed talks has broken off, though they said it was unclear whether the high-power firms were engaged in brinkmanship. Apollo Real Estate Advisors, according to the paper, had been floating significant changes to the hotel’s design in an effort to bring down costs. Some speculated that AEG may have resisted and the breach in negotiations may be an attempt by one, or both, parties to force more favorable terms.

AEG was to sell the land for the hotel at cost, but was not providing equity in the original deal.

In addition to agreeing to forgo as much as $270 million in room-tax revenues from the hotel over 25 years, the Community Redevelopment Agency has agreed to a $16 million below-market loan, and the city has authorized $4 million in fee waivers.

Samir Jain, a lodging analyst for Jefferies & Co. in New York, told the paper that AEG shouldn’t have trouble finding equity for the hotel amid a relatively strong market.

“I don’t think it will be hard at all – I think they’ll find it,” Jain said. “They can get very, very cheap money now…if you can borrow very cheaply, your required rate of return is not extremely high. They don’t have to be as discerning with their investment.” –by CelebrityAccess Staff Writers