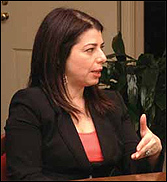 Ienner, who served as both president and CEO of Sony Music Label Group U.S. prior to promoting Anthony, said, "Giving Michele half my title is the perfect way to recognize that she is a true partner who has been a major force behind the success stories at all of our labels. Over the seventeen years that Michele and I have known each other, she has repeatedly taken a leadership role in major events affecting both the company and the industry – her support and guidance were central to building the Sony Music Label Group."

"When I first met Michele, she was the lawyer for Alice In Chains, who I was signing to Columbia. She was a brilliant negotiator who knew the business inside and out, and those factors, combined with her passionate, no-holds-barred approach to demanding the very best for her artists, made it clear that she had the makings of a truly great executive. Having both grown up in the business – me with my brother Jimmy and she with her father Dee – we had a natural connection. Her rare combination of leadership, creative sensibility, and business acumen have enabled her to make key contributions to the Group's development. Moving forward, we're going to keep on working closely together to give our labels whatever they need to support and develop their artists."

"From the moment I met Donnie, I knew we were likeminded and shared a passion and vision for our artists and for what would later become the Sony Music Label Group," Said. Anthony. "There are so few individuals who have shaped our industry in the way Donnie has that it is truly an honor to be his partner and friend. I've learned so much from him. One of his many outstanding talents is his ability to provide the executives who lead our labels with an intensity of purpose, as they work toward a common goal of lasting success. I am so excited to be working with the most important labels and artists in the history of recorded music."

Prior to that, she served as executive vice president, Sony Music Entertainment since 1994. She played a pivotal role in managing the company's operations, including overseeing key divisions, forming a wide variety of strategic alliances, spearheading special company-wide projects, and facilitating the signing of numerous artists. She has also served as Sony Music Entertainment's liaison to other Sony divisions and companies, including Sony Pictures Entertainment and Sony Electronics. From 1993-1994, she served as executive vice president of Sony Music, the domestic U.S. company, where, along with the president, she oversaw the day-to-day operations of all divisions within Sony Music and was involved in the administration of all aspects of the company's activities.

Anthony joined Sony Music in 1990 as senior vice president, where she established and managed the company's regional A&R offices in addition to overseeing special projects and new business opportunities. She was vital in negotiating and signing many of Sony Music's artists and was also involved with talent development, soundtracks, new technologies, and myriad special projects.

Prior to joining Sony Music,. Anthony was a partner in the entertainment law firm of Manatt, Phelps, Rothenberg & Phillips, where her clients included Guns 'N Roses, Alice In Chains, Ozzy Osbourne, Soundgarden, Rick Rubin, Sub Pop Records, The Sugarcubes and The Pixies.

Anthony is a recipient of the Norma Zarky Entertainment Law Award and the author of "Protection Against the Unauthorized Use of the Title of a Song as the Title of a Motion Picture; Doctrine of Unfair Competition in California under the Lanham Act" (1981). She is a member of the State Bar of California, and the Beverly Hills and Los Angeles County Bar Associations. For nearly a decade, she has been named one of the most powerful women in entertainment in Hollywood Reporter's annual "Women in Entertainment" issue.