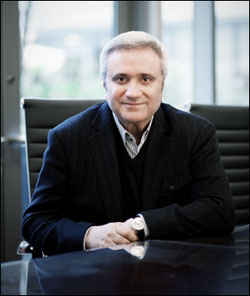 "Under Randy Phillips and his entire management team, the last three years at AEG Live have been the best three years in our history; including 2011 – our best year ever," said Timothy J. Leiweke, President and CEO, AEG. "We are proud that the management team’s entrepreneurial spirit, shared goals, incredible experience and knowledge of our industry, along with our employees, so many of whom have been here from day one, have been the backbone of this company these past ten years. It is also ironic that for years, people questioned whether or not we were committed to this business. Now we are the most consistent and respected in the industry. I am happy to have Randy back and look forward to the next ten years," Leiweke added.

In recent years, Phillips worked to develop a concept he calls the 'docuconcert' and was credited as a producer of "This is It," the 2009 behind the scenes documentary on the creation of Michael Jackson’s concert of the same name being produced by AEG at the time of Jackson's death. Phillips also served as the Executive Producer in Justin Bieber's big screen tour doc "Justin Bieber: Never Say Never," as well as the "We are the World 25 for Haiti."

Mr. Phillips also was instrumental in developing high profile residencies for artists such as Celine Dion at The Colosseum at Caesars Palace in Las Vegas. Other major artists with AEG/Vegas residencies included Supernatural Santana: A Trip Through the Hits at The Joint at Hard Rock Hotel & Casinos, Barry Manilow at Paris; Cher, ‘Bette Midler: The Showgirl Must Go On’ and the upcoming show staring Shania Twain, all at The Colosseum at Caesars Palace; and Prince who sold out an unprecedented 21 dates at The O2 in London in 2007.

Phillips began his career as an Executive Producer for The Rock Palace on NBC Network Television. Since then, he has served as a partner in the management/production company Stiefel-Phillips Entertainment where he managed the careers of artists in both music and film including Rod Stewart, Prince, Guns and Roses and Toni Braxton. Mr Phillips aslo served as President and CEO of Gasoline Alley Music, a joint venture record and publishing company with MCA Records where he was instrumental in the success of hit groups Shai and Sublime, each receiving multi-platinum honors.

"Words cannot describe both the challenge and fulfillment I have experienced in my career while helming AEG Live," said Phillips. "Tim Leiweke is a force of nature whose vision has changed our business in a very positive way and I am very proud of my contribution to that vision. From the day I started, AEG Live has consistently invested in its artists and its executives and will continue to follow the same business plan over the next 5 years. During my tenure, I have watched the BIG idea (not always mine!) become the Great accomplishment." – CelebrityAccess Staff Writers