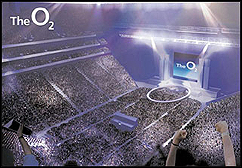 (CelebrityAccess MediaWire) — AEG is reportedly in talks with human-circus troupe Cirque du Soleil for a possible residency at The O2, the sports and entertainment complex being built at the site of the former Millennium Dome.

Under the deal, Cirque would have a regular show at the 1,800-seat theater that forms part of the venue, according to officials at Anschutz Entertainment Group and The Stage.

The company recently released illustrations that show how the finished O2 will look, and announced a completion date of July 2007. –by CelebrityAccess Staff Writers