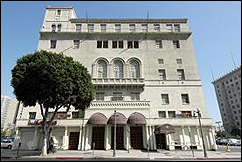 David Houk, who heads downtown-based Houk Development Company, purchased the 1924 theater and event space in December, after his business plan was approved by AEG.

“We bought it to restore it and produce new plays and musicals,” Houk told the L.A. Downtown News. “We plan to read new scripts and pick shows.”

Renovations at the theater are expected to last one year, and Houk plans to move his offices and theater company into the location once the project is completed.

AEG purchased the five-story Variety Arts Center for an estimated $8 million in spring 2004, with plans to develop it as a key component of the $2.5 billion L.A. Live sports and entertainment district rising two blocks away. The first phase is set to open late this year with a host of big-name restaurants and retail shops; later phases include a theater, movie complex, ESPN broadcast center, housing and a hotel.

Houk had eyed the Variety Arts Center for several years, and said he tried to purchase it around the time AEG bought it. When he heard that Anschutz was looking for a quiet sale, he jumped at the opportunity.

“It's a fabulous location to put on shows,” Houk told the paper. “I was told that more than dollars they were interested in a compatible use for what they were doing.”

The facility houses a 1,000-seat theater, along with a smaller theater and nightclub space, a lounge, a library and offices. –by CelebrityAccess Staff Writers