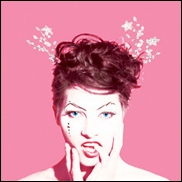 NEW YORK (Hypebot) – After a week of controversy and stone-throwing, Amanda Palmer has reversed course and will pay the guest musicians that she had just recently asked to play for free. "Me and my band have discussed it at length. and we have decided we should pay all of our guest musicians. We have the power to do it, and we’re going to do it. (in fact, we started doing it three shows ago.)", wrote Palmer.

For her current tour, Amanda Palmer put out a call for volunteer musicians to "hop up on stage with us for a couple of tunes." This request led to widespread attacks from musicians, music industry pundits and music fans as well as a seemingly smaller number of supportive responses from those same sectors of the population. Others – myself included – felt that as a social media pioneer, Palmer is uncharted waters and we all needed to cut her some slack.
On her blog, Palmer wrote:

"my management team tweaked and reconfigured financials, pulling money from this and that other budget (mostly video) and moving it to the tour budget. ?all of the money we took out of those budgets is going to the crowd-sourced musicians fund. we are going to pay the volunteer musicians every night. even though they volunteered their time for beer, hugs, merch, free tickets, and love: we’ll now also hand them cash."