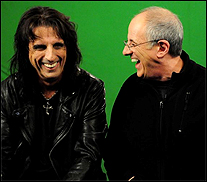 NASHVILLE (CelebrityAccess MediaWire) — Alice Cooper has begun working on a new album to be produced by Bob Ezrin as part of a new joint venture with Bigger Picture Group. Ezrin has a rich history of hugely successful collaborations with Alice including such groundbreaking albums as Billion Dollar Babies, Welcome To My Nightmare, School’s Out and Love It To Death and has, in the past, been described by Alice as “our George Martin.”

Ezrin is a partner in Bigger Picture Group, a Nashville based company that has been instrumental in contributing to the success of numerous artists including country music sensation Zac Brown Band, remarked, “I am delighted to be back in business with Alice Cooper and Shep Gordon’s Alive Enterprises and our whole company is over the moon about this collaboration. This is not a record deal but rather a partnership that involves virtually all aspects of Alice’s ever-expanding universe. And it’s a reunion with the first artist I ever produced and the first great manager I ever worked with. I couldn’t be happier.”

Bigger Picture will contribute to strategy, staging, special products, theatrical projects as well as the production, promotion and distribution of future Alice Cooper releases. The company will utilize its distribution agreement with Warner Music Group when the new Alice Cooper album, projected for release early next year, and other recorded product launches. A tour themed to tie in with the album, the concept of which is being kept under wraps for the moment, is being planned in support of the release.

Ezrin’s career has seen him work with some of the most enduring names in music including Pink Floyd, KISS, Peter Gabriel, Jane’s Addiction, Lou Reed, Deftones and scores of others but traces its earliest successes to his association with Alice Cooper, the band and the man. –by CelebrityAccess Staff Writers