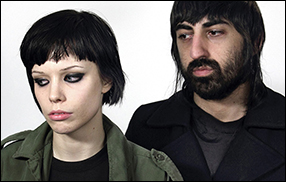 TORONTO (CelebrityAccess) — In what is becoming an all too familiar theme, Canadian electropop group Crystal Castles lead singer Alice Glass announced her departure from the band and alleged physical, mental, and sexual abuse against bandmember Ethan Kath.

In a lengthy post to her webpage, Glass alleged that Kath, whose real name is Claudio Palmieri, first approached and initiated sexual contact with her when she was fifteen.

"I met “Ethan Kath” (Claudio Palmieri) when I was in the 10th grade. The first time he took advantage of me was when I was around 15. He was 10 years older than me. I came to in the back of his car extremely intoxicated (from drinks he had given me that night). We didn’t talk for months after that. He went to great lengths to find me again, stalking me and driving past my high school looking for me," she wrote.

She went on to claim that Kath encouraged her to drop out of high school and engaged in both physical and emotional abuse.

"He became physically abusive. He held me over a staircase and threatened to throw me down it. He picked me up over his shoulders and threw me onto concrete. He took pictures of my bruises and posted them online. I tried to leave, and he swore that it would never happen again, that he would never physically abuse me again," she wrote.

In the wake of Glass's post, the band appears to have canceled all of their upcoming shows, including this weekend's appearance at Voodoo Music Festival in New Orleans. While no formal announcement has been made, none of the venues on their itinerary currently list active Crystal Castles tour dates.

Kath was unavailable for comment but in a previous statement released through his attorney to Pitchfork, he said: “I am outraged and hurt by the recent statements made by Alice about me and our prior relationship. Her story is pure fiction and I am consulting my lawyers as to my legal options. Fortunately, there are many witnesses who can and will confirm that I was never abusive to Alice.”