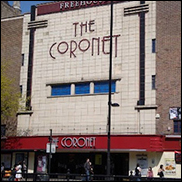 LONDON (VIP NEWS) — Historic London venue The Coronet is to close after a campaign to secure its future proved unsuccessful.


The management team has agreed a one-year extension to its lease but the Elephant & Castle venue, which has hosted the likes of Oasis, Tom Jones, Justin Timberlake and Alicia Keys, will shut down on January 5, 2017,


“We have been here for so long, and we will be really sad to go, but with the Elephant & Castle changing so much, so quickly, it’s become clear that the evolving character of the area is no longer right for a venue like ours,” said The Coronet’s director Richard Littman.


“We’ve worked with our landlord to extend our lease for one final year, until January 5, 2017. We’re looking forward to welcoming back old friends and making new ones – if you’ve ever wanted to perform here then get in touch quick – the calendar is filling up fast.


“Rather than fighting against change, we want to focus on celebrating The Coronet’s incredible history. What better way to do that than by making The Coronet’s final year of operation its biggest and best!”


The announcement of its closure comes weeks after London Mayor Boris Johnson backed a campaign to halt the drop in the number of music venues in the capital.