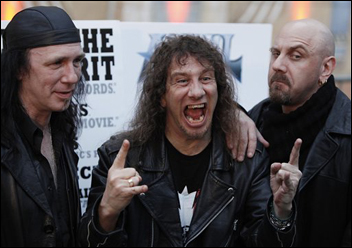 LOS ANGELES, CA (CelebrityAccess MediaWire) — Anvil, the Canadian heavy metal band whose "Cinderella" story, "Anvil! The Story of Anvil," is nominated for a Critics Choice Movie Award in the category of Best Documentary, will travel to Los Angeles to attend the awards presentation that will be held at the Hollywood Palladium this Friday, January 15.

The rockumentary has been named one of 2009's Best Documentaries by a slew of film critics associations across the continent, including critics in Chicago, San Francisco, Toronto, and Las Vegas, as well as the International Documentary Association, the Online Film Critics Society, and the National Society of Film Critics. It also made the Year End Top Ten lists in publications such as the New York Times, Washington Post, Newsweek, and Village Voice. The 15th Annual Critics Choice Movie Awards will be broadcast January 15 live on VH1 at 9PM ET/PT.

The bad news is that the trip to Los Angeles means Anvil, who kicked off its "The Anvil Experience" North American tour in Cleveland, OH last week, will have to cancel its January 14 date in Baltimore, MD and the New York City date set for January 15. But, it's not all bad news as the New York date has been rescheduled to take place on Friday, March 19, still at The Gramercy Theatre, still with an 8PM show time. Tickets purchased for the 1/15 show will be honored on 3/19.


And there's more Anvil tour news. Originally, "The Anvil Experience" concerts were going to open with a screening of the "Anvil! The Story of Anvil" documentary followed by the band playing a live set. However, according to Anvil's guitarist/vocalist Steve "Lips" Kudlow, "We've been so fortunate with the success of the film and then the DVD, so many people have already seen it, so we've decided that this tour is going to be all about the music, we're just going to play our set, and just ROCK with the fans. 'The Anvil Experience' will be an evening of pure, unadulterated rock'n'roll." Local bands will open the shows.


The 27-date concert tour – the band's first major tour in more than a decade – is in support of "Anvil! The Story of Anvil," as well as the band's latest album, This Is Thirteen which one rock critic called "Anvil's "best record in over two decades."