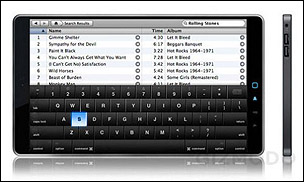 CUPERTINO, CA (CelebrityAccess MediaWire) — If the rumormill is correct, Apple is preparing to launching a new handheld device before the Christmas shopping season (perhaps as early as September, some sources say) that would be linked to their hush-hush music project, codenamed Cocktail.


According to the Financial Times, the device in question would be a hand-held computer akin to the iPod Touch, but larger, with a 10-inch touchscreen. The device would serve as a portable entertainment platform for e-books, movies and music.


While the tablet would not have built-in phone capabilities, it would have a wi-fi connection and potentially be capable of connecting to 3G wireless data networks.


Apple has reportedly been in negotiations with the major record labels, EMI, Sony Music, Warner Music, and Universal Music Group about revamping the 'album experience' in their iTunes music store in order to make them a more interactive experience to be offered on the device..


While there has been a lot of official details on Cocktail thus far, Apple appears to be trying to drive album sales, with their higher margins, over single tracks by offering features such as an interactive set of "liner notes" with lyrics, embedded videos, artwork and ways to access the music.


The device would also present Apple's challenge to the highly successful Amazon.com book reader, the Kindle and Sony's less splashy Reader. The price point hasn't been confirmed by Apple, but most experts are placing the device between $600-$1,000 ducats.