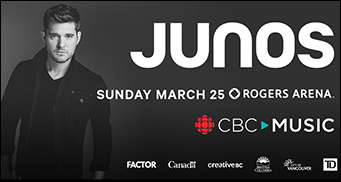 VANCOUVER, BC (CelebrityAccess) — Canadian art-rockers The Arcade Fire, Jessie Reyez and the late Gordon Downie were among the top nominees for this year’s Juno Awards.

Singer-songwriter Jessie Reyez was hot on the heels with four picks, including Breakthrough Artist of the Year, R&B/Soul Recording of the Year, Fan Choice and Video of the Year.

The Tragically Hip frontman Gordon Downie, who passed last October after a battle with cancer, picked up a nomination for Artist of the Year, as well as picks for Adult Contemporary Album of the Year, and Songwriter of the Year (along with co-writer Kevin Drew) for “A Natural.”

Notable Canadian artists not on the list this year include perennial favorites Celine Dion and rapper Drake, who reportedly did not submit material for consideration to the Junos this year.

Set to take place a Rogers Arena in Vancouver this year, Juno weekend will take place on March 24th & 25th with Michael Bublé serving as the master of ceremonies for the gala.