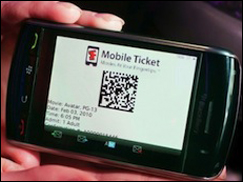 LONDON (VIP NEWS) — Paperless tickets could help combat touts but many venues still do not have the capabilities to support them, say independent music promoters.


Although most tickets are sold online, bringing a printed barcode ticket means it is not truly a digital transaction.


But one independent UK promoter Anton Lockwood, who works for DHP, says paperless is not always "practical".


"It only works where the cost of introducing the system can be spread over high ticket prices," he said.


"The physical design of arenas can make paperless tickets much easier to handle but in club venues, for example, it's more difficult as there isn't usually the space for equipment like electronic turnstiles."


Ticketmaster defines a paperless ticket as one where the credit card used to book the tickets is brought, along with ID, to the venue for entry. At some venues you may have to bring a printout with a reference number or barcode for scanning, hence why they may not be truly paperless.


Dave Newton of We Got Tickets, an online retailer, believes that the technology has actually made it easier for small venues.


"Paperless ticketing has brought the cost down [for smaller venues and promoters] and opened up the option of advanced ticketing," he said.


"Resistance is still there at the larger venues because they're used to having people stood on the door ripping tickets."
'Artist-led'


The benefits of going paperless include the chance for streamlined venue entry and the opportunity to control resales and touting.


There are downsides though, which were demonstrated in September after Radiohead fans had problems claiming or returning their paperless purchases.


A spokesperson from Ticketmaster says that paperless ticketing is an "artist-led initiative" and they say it's up to the musicians and their promoters whether they use physical tickets or not.


He said: "Following the recent set of dates at The O2 for Robbie Williams, a survey that we [Ticketmaster] completed suggested that 87% were satisfied with their experience of paperless.


"Fans agreed that it is the future of ticketing."
New technology


Other technologies, such as electronic wristbands and smartphone apps, may be the way that paperless ticketing is rolled out across the industry.
Continue reading the main story


Dave Newton thinks that when marketing companies capitalize more on the tagging, social media and promotion capabilities, tickets may go completely digital as a way for them to "capture that data" and create "up-sell opportunities".


Technologies are also being developed for when people have actually arrived at the gig venue.


One of those includes inaudible frequencies, sounds that can be played out of speakers at gigs that cannot be heard by people but can be picked up by smartphones.


Theoretically the noise trigger could then make the smartphone bring up all kinds of content from merchandising or ticket purchase options or play video.


New innovations may also change the way people buy tickets in the future and how music fans experience the gig once they are actually there.
Robbie Williams Fans were satisfied with the paperless tickets at Robbie William's last concert –According to Newsbeat